The characters of Odin Sphere. 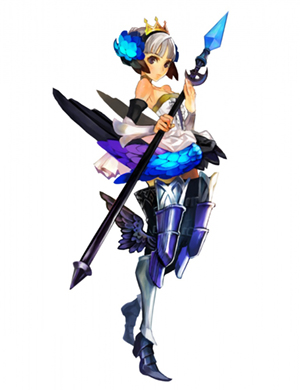 "I will serve my responsibility as the King's daughter and fight."

The main character of the first book, Valkyrie. The second princess of Ragnanival and daughter of the Demon Lord Odin. Gwendolyn loves her father dearly, but she feels neglected as he shows greater favor to his other children. Throughout the story, she struggles with her feelings towards him, her sister's death and her own worth. 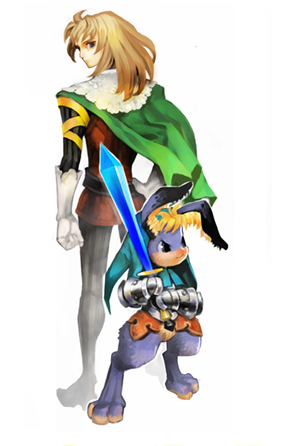 "Someone called me prince...but alas, I am no prince. I am but a beast."

The main character of the second book, The Pooka Prince. The Prince of Titania who loves Velvet. Was turned into a Pooka and left in the Netherworld. 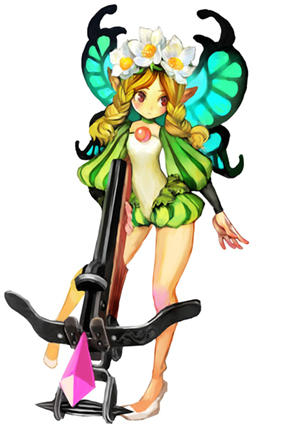 "I am Mercedes, daughter of Elfaria. As long as I am alive, I shall always keep my weapon pointed at you."

The main character of the third book, Fairy Land. The daughter of the Queen of the Fairies. She's also the main protagonist of the spin-off manga Odin Sphere Leifthrasir: Little Fairy Queen. 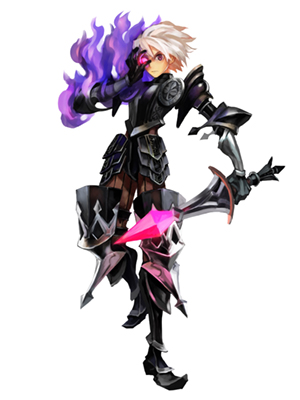 "As long as I have this Belderiver...even the dragons shall fear me."

The main character of the fourth book, The Black Sword. A human warrior raised by the Fairie noble Melvin to be the ultimate weapon. 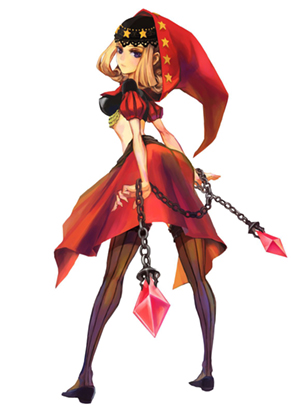 "I am of King Valentine's bloodline."

The main character of the fifth book, Fate. A young witch who is often found in the Forest of Elrit.

The Armies of the Aesir 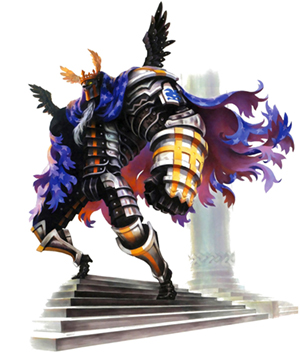 "Observe this blue orb. Behold the might of the wicked eye Balor. Queen, accept defeat. With this, I will become absolute ruler of the world."

The king of the nation of Ragnanival. He is the father of Gwendolyn and Griselda, and he is also the father of the Valentine twins. His ambitions drive much of the conflict in both the backstory and main game, and, whether directly or indirectly, he is the ruler all the characters owe some of their hardships to. Heck, his name's in the title! 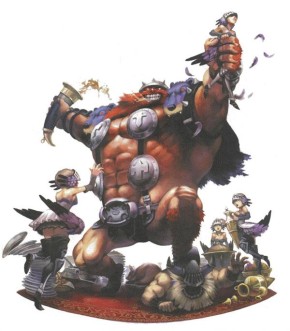 A huge Berserker who serves under Odin as his vassal and army general. Despite his rank, he's an incompetent oaf who aims to take Odin's place. He gets killed by Gwendolyn on the top of Horn Mountain, but reappears in the following chapter possessing Odin. Fortunately, Gwendolyn defeats him and he's vanquished once and for all. 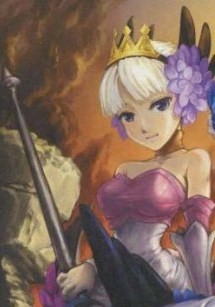 "This spear has slain many enemies, making a mountain of corpses."

Odin's daughter and Gwendolyn's elder sister, she was the strongest valkyrie of Ragnanival and the favorite of the Demon King. However, she was slain in battle. She reappears to Gwendolyn taking the form of a little bird and her ghost appears to Odin right before his death. 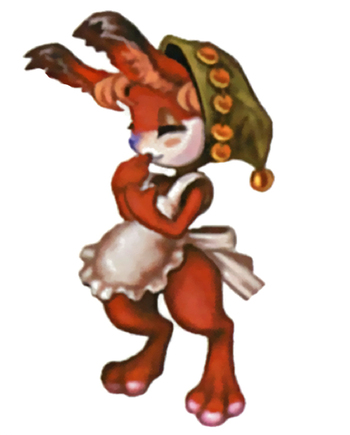 Gwendolyn's pooka lady-in-waiting. She serves as a surrogate mother or sister for the princess, who feels ostracized and unloved by her family.

The Forces of the Vanir 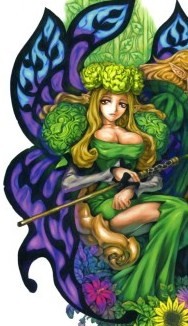 The beautiful queen of the Fairies and rival of the Demon King Odin. She's also Mercedes' mother. She appears only in the first parts of Mercedes', Gwendolyn's and Oswald's stories as a good-natured ruler. She's killed in battle by Odin. Her true name is Fimbulvetr. 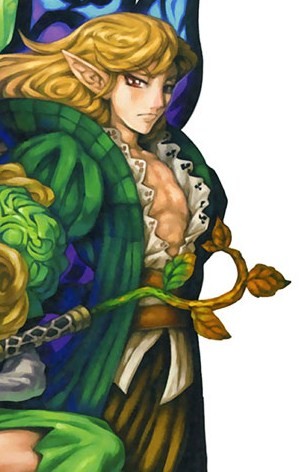 "This is a turning point. Royalty is handed down as judgement of the Gods. The crown still awaits its perfect master."

One of the Fairy nobles and cousin of Elfaria. Is a smug, ambitious prick who is vying for the throne. He also adopted Oswald and gave him the Belderiver sword.

"I never should have crafted that weapon. It will part the heavens and tear the earth assunder."

A dwarf blacksmith from Ringford, who served Melvin and his Dark Knights and forged Psypher weapons for them, though many of them were lost. He's exiled to the Netherworld by Melvin and later rescued by Mercedes, so that he can power up the Tesla crossbow. He also supports Oswald a lot, probably feeling guilty for creating the Belderiver sword that Melvin had him wield. 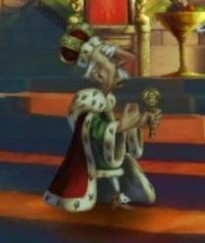 The human king of Titania, and father of Cornelius. In the past he fought and slain his father Gallon when the latter abused the Darkova spell. Uh, also his brother Edgar is Oswald's father, so he's Oswald's uncle. 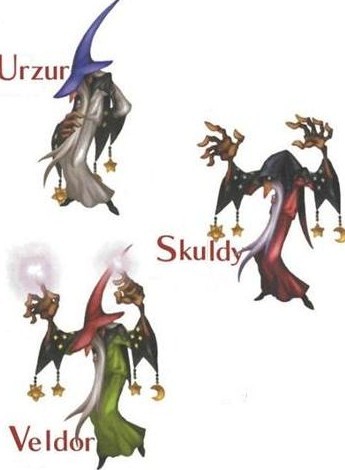 "Only a man without fear dares to outwit a Wise Man."

Consisting of Urzur, Skuldi and Beldor, these three wizards scheme to manipulate every major player in Erion for their own benefit. Though based out of the sewers of Titania, they can be found sowing dissent in Odin's court (Skuldi), rubbing shoulders with the nobles of Ringford (Beldor) or advising King Edmund (Urzur). They also have a shaky alliance of sorts with Ingway and Velvet. The trio are actually responsible for at least part of Odin's magical power, having been duped into taking him as an apprentice when he disguised himself in his younger days. They believe they can direct the flow of destiny with liberal interpretations of the prophecies and the right amount of coercion, treating anyone and everyone as pawns. This ends very, very badly for them. 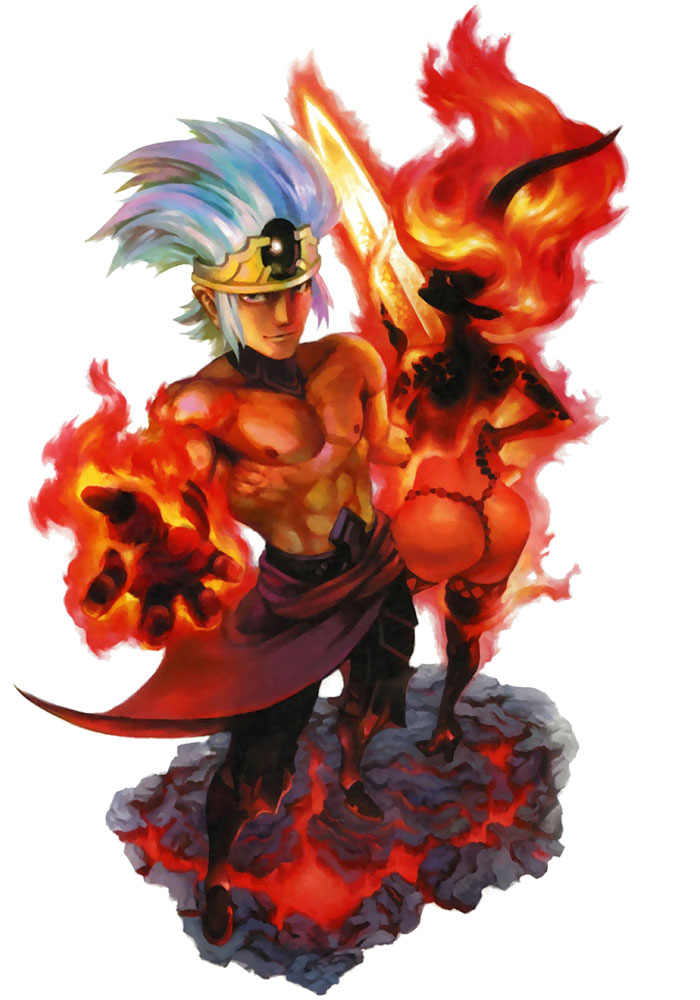 The king of the Fire Kingdom in the Volkenon Lava Pit. Previously engaged to Gwendolyn and not at all happy to learn Oswald is muscling in on them. He is also known to be one of the Five Disasters of Armageddon, and his refusal to leave his kingdom with his army is one of the few things keeping it from happening. He takes his army inland once the sea begins to rise with Armageddon, burning Ringford to the ground, but ultimately falls in battle to Mercedes, who reveals in her final moments her true name as Yggdrasil, the World Tree prophesied to end him. 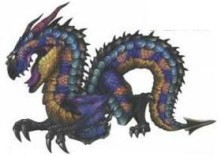 "Stay away, puny one. Those who approach, will meet my fangs."

One of the last dragons, he's a huge, serpent like wyrm who was enslaved by the Three Wise Men, and is forced to do their bidding. He fought the main characters on different occasions (all of them) but is finally killed by Cornelius in the sewers under Titania. 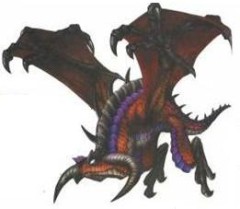 "I am Wagner, Ruler of the Sky. Not even the Beast of Armageddon can reach me above the clouds."

The other Dragon and the "King of the Skies", he's so powerful that few dare to attack him. He lives on the top of Mount Ridgehorn and is pissed at humans for what they did to dragons, but ultimately falls to Oswald, slayer of his friend Hindel.

"Death cannot be avoided, but fate can be redirected."

The All-Knowing dragon, able to see the future. He used to be Velvet's teacher and a seer. He allows Oswald to slay him with the Belderiver, before giving him some last advice.

The last dragon and one of the five disasters of Armageddon. Was kidnapped when still an egg and hatched in Volkenon Lava Pits by King Valentine in order to use him for his revenge. Despite his tiny size, it's incredibly powerful and dangerous and the crown of Valentine grants him power. During Armageddon he's put inside the Cauldron where he absorbs the Phozons and becomes a gargantuan wyrm, bringer of chaos. He's finally killed by Gwendolyn who uses her spear to slash his horn, removing his crown and killing him.

Queen of the Netherworld, Odette 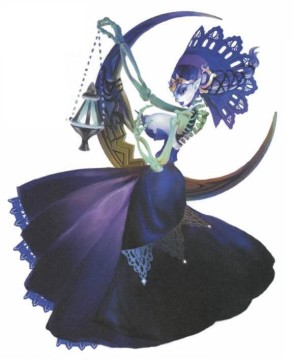 The queen of the Netherworld, Endelphia. Normally has little care for the living world, but the acts of Odin incense her and she has found new fascination with Oswald, whose soul was promised to her by Melvin. 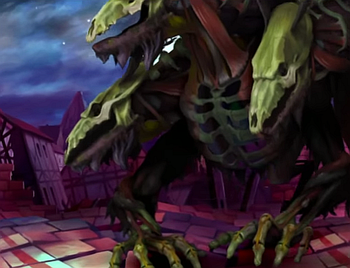 "There is a royal secret... the only one to kill me... is someone of royal blood. So the prophecies state. Even if you are the shadow, a common warrior like you will never be able to kill me!"

Once a great king from Titania, he used the forbidden spell of the Darkova kept in the Book of Transformations and went mad with power. He ravaged the lands of Valentine for seven days before getting slain by his son Edmund. He gets imprisoned in the Underworld of Endelphia and tortured forever for his deeds. He eventually gets out when Odette is killed and starts the Armageddon, but gets killed by Oswald, who possesses both his royal blood (due to being the son of Edgar, Edmund's older brother) and the power of Queen Odette.

The Kingdom of Valentine 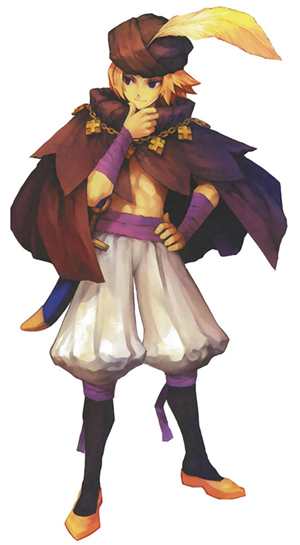 "Aye. Unpleasant, isn't it? The cowardly prince who destroyed his country will now give his life to save it."

Velvet's elder twin brother. Although he is not a playable character, he plays an important role in the game nonetheless, be it as an enemy, ally, or the first of the Five Disasters of Armageddon, being the second Darkova. In the end he attempts to destroy the Cauldron with the forbidden power only to lose control of his body, and is eventually slain and returned to normal by Cornelius, who, due to being cursed himself, is no longer a "man". He uses his final moments to give Velvet the clue she needs to stop Armageddon and thinks of Mercedes before dying. 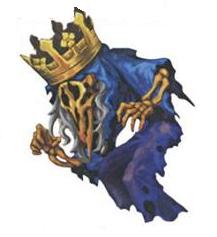 The late king of the destroyed nation of Valentine. He is the father of Princess Ariel, which makes him the grandfather of Velvet and Ingway. Reduced to a mere shell of his former self, he seeks to destroy Erion and all those who inhabit it.

The late Princess of Valentine, daughter of the King of Valentine, lover to King Odin, and mother to their children Velvet and Ingway. While she's never heard or seen in-game, she nonetheless plays a pivotal role in Velvet, Ingway, King Valentine, and Odin's backstories.

Outside of the Story 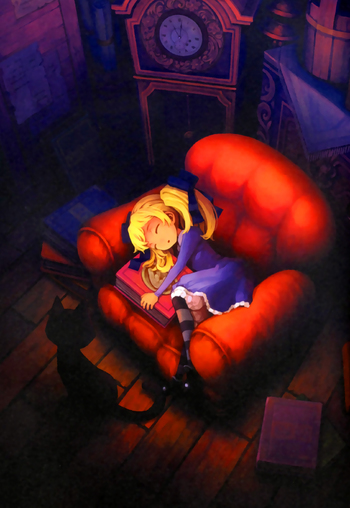 A little girl who finds the books that comprise the overall story as written by her grandfather in her attic and reads through them.

Alice's adorable cat. Serves no purpose in the plot, but darn if he isn't cute.