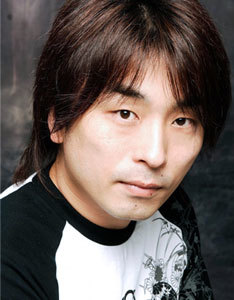 Missing from this image: flames in the background, giant explosions, and burning mecha fighting.* His other hand is the one glowing with an awesome power
This description of Tomokazu Seki glows with an awesome POWER! Its burning letters tells the Tropers to read it! Take this! Its love, its anger, AND ALL OF ITS SORROW! SHINING FINGER PAAAAAGGGGEEEEE! GO! GO! GOOOOO!
(Beat)
I am Tomokazu Seki. Tomokazu Seki. Are you Tomokazu Seki? No, you are not.
Advertisement:

Tomokazu Seki (born September 8, 1972) is a part of the voice actor quartet Weiß Kreuz led by Takehito Koyasu. He made himself a well-known name in the anime industry due to his versatile voice, which ranges from the serious, to the comical, and even the deranged. His forte, however, is his ability to pull off Hot-Blooded characters so well it rivals Nobuyuki Hiyama (and they duke it out in They Are My Noble Masters).

He has several relationships with other voice actors. With fellow Weiß Kreuz member Shin-ichiro Miki, they're usually cast as buddies. With Ayako Kawasumi, they often play either couples, or Seki's character has an unhealthy, unrequited lust for Kawasumi's character.

And finally, he has an alleged rivalry wit—WE CANNOT LOSE TO SUUUUGIIIIIITAAAAAAA! ...er, right, of course not, since they have the same first name and all.

Another interesting note is that to this day, he is still single and willing to remain a bachelor.

Who gave you permission to list my notable roles, MONGREL?!

This description has ended. Why are you still here? Go somewhere else... mongrels.
I've come to give back your 300 yen!