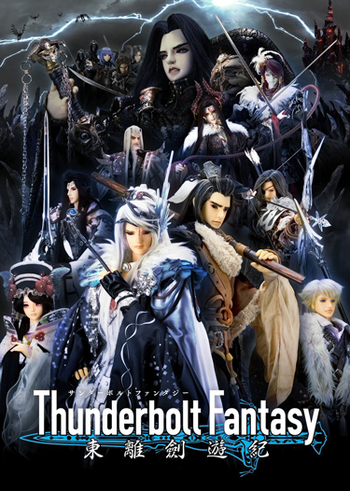 This is the poster of season 1. Click to view poster for season 2. 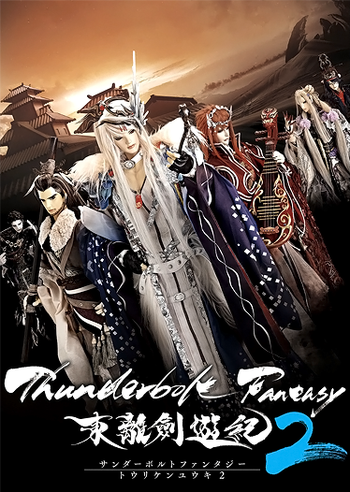 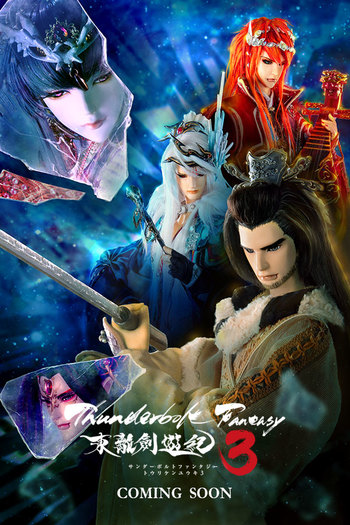 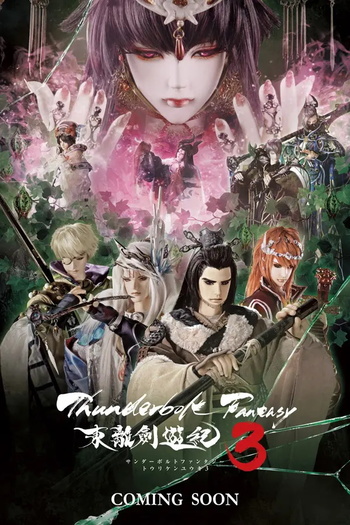 Thunder. Lightning.
Our story begins with that which shakes the heavens and earth.
Like a thunderbolt in the blue sky, a startling fantasy begins to unfold!
Advertisement:

show(s) produced by Taiwanese production studio Pili International Multimedia (known in the west as the creators of what became Wulin Warriors) after stumbling upon their works at a Taiwan anime and comic fan convention he attended; Figma creators Good Smile Company assists the show in character creation alongside nitro+'s stable of artists. Hiroyuki Sawano (later joined by Takafumi Wada) scores the show's soundtrack, while T.M.Revolution a.k.a. Takanori Nishikawa sings the theme songs and joins the Japanese All-Star Cast in season 2.

The sprawling series of 3 (of a planned 5) seasons of the TV show and 2 movies is set in a fantasy world of swords, wizardry, and demons in the nation of Dong-Li, which in the past was ravaged by an invasion from the Demon Realm that split it from its neighboring nation Xi-You by the impassible Wasteland of Spirits, full of dangerous dragons and demon-worshipping barbarians. The main cast comprises the illusionist and Gentleman Thief Lin Xue Ya and the wandering and taciturn swordsman Shang Bu Huan who has somehow crossed the Wasteland of Spirits unscathed; Shang Bu Huan's compatriate Lang Wu Yao, a wandering minstrel with an enchanted voice and a magical talking pipa named Ling Ya, joins the main cast in season 2.

Season 1 focuses on Mie Tian Hai and his followers the Xuan Gui Zongnote "Black Demon Sect" or "Genkishuu" seeking out the Tian Xing Jiannote "Sword of Divine Retribution" or "Tengyouken", a mystical weapon said to have actually slain a demon god centuries earlier, but the sword is sealed away and its hilt and crossguard are kept by two guardian priests or Hu Yin Shi, the brother-sister pair of Dan Heng and Dan Fei. When Dan Heng is murdered by Mie Tian Hai, Dan Fei escapes with her part of the sword and crosses paths with Lin Xue Ya and Shang Bu Huan. With Lin Xue Ya's meddling, Shang Bu Huan is made to help Dan Fei retrieve the other part of the Tian Xing Jian from Mie Tian Hai to prevent him from taking the sword for himself. To assist in Dan Fei's quest, Lin Xue Ya gathers a Rag Tag Band of other warriors from his past including the one-eyed sniper archer Shou Yun Xiao and his protege Juan Can Yun, the demoness necromancer Xing Hai, and the assassin Sha Wu Sheng who actually wants Lin Xue Ya dead.

Season 2 finds Shang Bu Huan seeking to rid himself of the Sorcerous Sword Index, a compendium of dozens of magical weapons Shang Bu Huan gathered in Xi-You to prevent them from being used for nefarious purposes. After he believes he has found safe place for it at Xian Zhen Fortress, he is reunited with Lang Wu Yao and Ling Ya who have found him in Dong-Li. But he soon realizes that if his friends have found him, so have his enemies. The Femme Fatale Xie Yingluo, an assassin sent by the evil Huo Shi Ming Huang, has already intercepted the Index, and after a fight gets away with two of its weapons. Elsewhere, corrupt Xi-You Imperial envoy Xiao Kuang Juan has arrived in Dong-Li to convince his counterparts that Shang Bu Huan is a dangerous criminal who must be stopped at all costs. Shang Bu Huan and Lang Wu Yao track down Xie Yingluo for the two swords she stole, one of which is the sentient Seven Blasphemous Deaths who seeks to take over the world, while Lin Xue Ya has his own sights on Xiao Kuang Juan as his new mark, and amongst all of these conflicts the heroes and villains alike cross paths with the ascetic monk Di Kong who seeks meaning in his life.

Season 3 features Huo Shi Ming Huang and his Order of the Divine Swarm joining forces with Xing Hai to fight Shang Bu Huan for control of the Sorcerous Sword Index. Huo Shi Ming Huang wants it so he can take over the human world, and Xing Hai wants it out of the way so she can lead the demon realm into a new, more diplomatic, incursion into the human world. The Divine Swarm's Wan Jun Po and Yi Piao Miao are sent to help Xing Hai track down Shang Bu Huan and his comrades in her Void Junction, a magic location that she uses to grow plants that produce scrying mirrors that are portals to other locations, realms, and times, which she intends to use to bring her sister Zhao Jun Lin back into her physical body.

Two films were released in both Japan and Taiwan (and internationally on Crunchyroll) expanding the Thunderbolt Fantasy universe. Thunderbolt Fantasy: The Sword of Life and Death was released in December 2017 and is split into two halves. The first half focuses more on Sha Wu Sheng and his past with Lin Xue Ya and why he seeks his death; this was based on a light novel Thunderbolt Fantasy Gaiden, which also includes a similar story about Xing Hai's past with Lin Xue Ya. The second half of the film serves as a comedic interquel between seasons 1 and 2, with Shang Bu Huan meeting a man posing as him who has been telling tall tales of the events of season 1 which overstate his own importance in the battle against Mie Tian Hai and the Xuan Gui Zong. The second film Thunderbolt Fantasy: Bewitching Melody of the West came out in October 2019, and focuses on Lang Wu Yao and how he came to be one of Shang Bu Huan's equals and allies in the protection of the Sorcerous Sword Index, along with fellow musician Mu Tian Ming. The film also introduces the sadistic Xi-You Imperial Princess Chao Feng, who gave Xiao Kuang Juan the quest to retrieve the Index for her father the Emperor.

In addition to the Gaiden light novel mentioned above, two manga were released that adapt and expand upon the events of season 1; one of these manga is subtitled Otome Gen'yūki (乙女幻遊奇) and retells the story from Dan Fei's point of view (available for free online

). In the build up to season 2, the Takarazuka Revue's Star Group staged a musical adaptation of season 1 to accompany their other original stage show Killer Rouge (Killer Rouge／星秀☆煌紅)note Pronounced "Amazing Star Killer Rouge", which toured around Japan and Taiwan in August 2018; Pili even made a Lin Xue Ya puppet dressed up as his Cross-Cast Role actress Yuzuru Kurenai's outfit in Killer Rouge to promote the tour.

Important Note: For the convenience of editing, all names in this work use the Hanyu Pinyin transliterations as used by the English language editions released by Crunchyroll, but without the diacritic marks to mark tones, or English translations from the same source. More details for the names, including the Chinese names with tonal marks and the Japanese pronunciations, can be seen on the character pages.
open/close all folders

Example of:
A Father to His Men