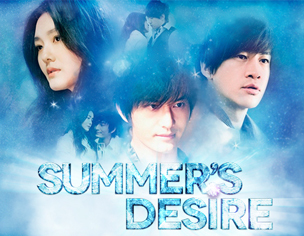 Summer's Desire a 2010 Mandarin production based on a book by Ming Xiao Xi that was aired in Taiwan and mainland China. The story revolves around three people: Yin Xia Mo, who dated Ou Chen in high school. Ou Chen was a jealous rich kid, who forgot Xia Mo due to traumatic amnesia. Meanwhile, Luo Xi, an orphan who was taken into Xia Mo's family. The teenage tensions escalated until Luo Xi was forced to leave the country. Five years later, they meet again. She is an aspiring performer, Luo Xi is already a popular actor, and Ou Chen is the head of a vast entertainment conglomerate. And the Love Triangle is rekindled.