Visual Novel / You and Me and Her 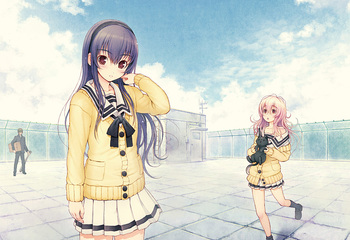 From left to right: Shinichi, Miyuki and Aoi
Life is like a staircase. You just gotta keep climbing. Otherwise, if you start to overthink it, you'll have trouble taking the next step.
Advertisement:

YOU and ME and HER note Kimi to Kanojo to Kanojo no Koi in Japanese, which is also often abbreviated as Totono, is a 2013 Visual Novel by nitro+. The game was released internationally by JAST USA on May 5th, 2020, with a Steam

release in May 25th.

The story follows Susuki Shinichi, a guy with no unique qualities and whose daily routine frustrates him. He puts his name under a romance novel club at his school, but in reality, he doesn't associate himself with any club. He also has a complex about being stuck in the background and ignored by his childhood friend-turned-class idol, Miyuki Sone.

Although Miyuki was Shinichi's childhood friend, she hides it at school and does not talk to him. She excels at the academy's drama club, and is great with a baseball bat; a skill she practices for the next drama club performance, which revolves around softball. She also loves cats, but unfortunately has allergies to them.

One day, at the roof of the school, Shinichi ends up meeting a pink-haired girl, named Mukou Aoi. Aoi is a denpa

girl who has trouble paying attention in class. She walks around with a smartphone with no reception, and her pastime is sending messages to "God" from the roof of the school. She also has trouble gauging distance between people.

The plot begins with Shinichi's attempt to teach friendless Aoi how to socialize with people. Shinichi asks Miyuki for help, and the three of them start to spend time together. As Aoi begins to warm up to Shinichi, Miyuki draws closer to him too, rekindling the suppressed feelings they had from childhood, and pushing the three further into a love triangle.

However, things aren't exactly what they're look like at first glance. And soon, it all goes to hell.

The game is written and directed by Shimokura Vio (Sumaga, Steins;Gate's Suzuha route) and the character designs and art were ilustrated by Tsuji Santa (of Super Sonico fame). The original soundtrack for the game was composed by Hirata Hironobu and features theme songs by Keigo Iwase, Swinging Popsicle, Tada Aoi and Kanako Itou.

YOU And ME And HER contains examples of:

Alternative Title(s): Kimi To Kanojo To Kanojo No Koi