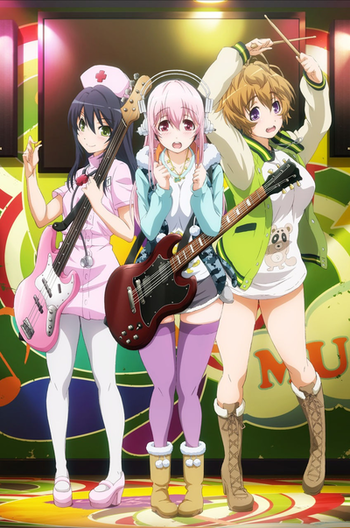 Directed by Kenichi Kawamura, with Yousuke Kuroda managing the script, SoniAni: Super Sonico The Animation (SoniAni for brevity) premièred as a part of the Winter 2014 Anime line-up. The anime features Super Sonico, Nitro Plus' Company Mascotnote  actually the mascot for Nitroplus' live concert 'Nitro Super Sonic' which first introduced her in 2006, and follows the adventures she encounters in her everyday life. Between her endeavours in academics, modelling career, music and part-time job as a waitress, Sonico always manages to find the time to brighten up the lives of those around her. According to the promotional video

Pony Canyon released, Super Sonico is voiced by Super Sonico.note She is actually voiced by Ayano Yamamoto, but Nitro Plus has been trying to cover it up after a PR incident.

Despite its name, this series is unrelated to Sonic the Hedgehog.