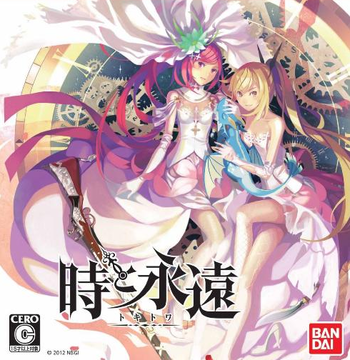 The Japanese cover.
Time and Eternity (alternate Japanese Portmantitle: Tokitowa) is a PlayStation 3 JRPG developed by Imageepoch, released in Japan by Bandai Namco Games in Oct., 2012 and in the United States by NIS America in July 2013.
Advertisement:

It features Supporting Protagonist Zack, a knight of the small kingdom of Kamza, preparing for his wedding with princess Toki. However, on the day of the wedding, a group of assassins interrupt and Zack is killed while protecting Toki. While he thinks he's had the best death ever, he quickly learns two things: Toki has a second personality within her body named Towa and she can travel back in time. While Toki returns six months into the past, Zack's spirit travels along by inhabiting the body of Toki's pet dragon, Drake, and the two (three?) set out to prevent the disaster at the wedding.

The game's strong points are its beautiful, expressive hand-drawn characters, excellent soundtrack, and downright gorgeous visuals in various locations while many fans are split on the character personalities, story and gameplay.