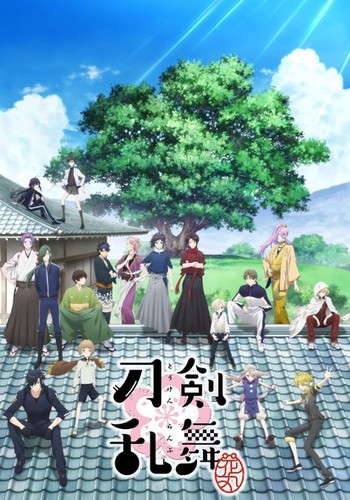 "This anime is about the stories of the Hanamaru days of a certain group of Sword Warriors in a certain citadel."
Advertisement:

Touken Ranbu - Hanamaru is an anime based on the popular browser game Touken Ranbu.

The year is 2205, and a mysterious force known as the Historical Revisionists are staging attacks on the past in a plot to change history in their favor. The ones who are sent to stop these attacks are the Touken Danshi, historical Japanese swords who have been brought to life as warriors by the Saniwa, who has the power to bring objects to life. Yamatonokami Yasusada, a newcomer to the Saniwa's citadel, must learn to adjust to life with the other swords as well as stop the Historical Revisionists from altering history without trying to change it himself.

The series focuses mostly on Slice of Life elements, though there is still some action and a few serious moments. It is animated by Dogakobo and aired as part of the Fall 2016 Anime season. It is also streaming on Crunchyroll, with Funimation doing a Broadcast Dub for the anime.

In 2017, the series was confirmed to get a second season. Titled Zoku Touken Ranbu Hanamaru, this season focuses on Kashuu and the gang after Yamatonokami leaves for training. The second season premiered on January 7th, 2018.

On February 14, 2021, a trilogy of movies entitled Toku Touken Ranbu Hanamaru ~Setsugetsuka~ was announced; it reportedly involves the appearance of Yamanbagiri Chougi, and is set to premiere in 2022. The films are broken up into Snow Story (Yuki no Maki), Moon Story (Tsuki no Maki), and Flower Story (Hana no Maki).

There was also a manga adaptation of the series that ran in Shonen Jump + from 2016 to 2019. It ran for five volumes, penned by Saru Hoshino.