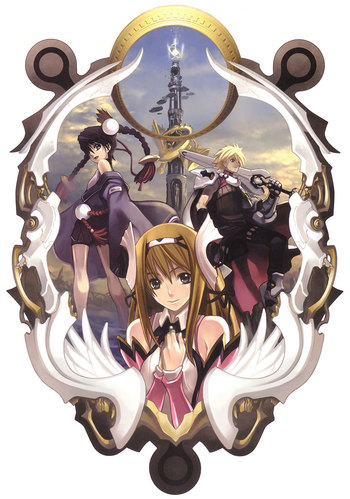 The first game in the EXA_PICO collection of games and the Ar tonelico trilogy, Ar tonelico: Melody of Elemia, originally titled Ar tonelico: Sekai no Owari de Utaitsudzukeru Shoujo (The Girl who Continues to Sing at the End of the World) takes place in and around the first tower, in the region of Sol Ciel. This is where the series gets its name: Ar tonelico is the name of that tower. The story starts in the city of Platina, during an outbreak of enemy creatures called Viruses. The protagonist, a Knight of Elemia named Lyner Barsett, goes to investigate with fellow knight Ayatane, and the tower administrator, Shurelia. Unfortunately, they rapidly discover that the Viruses are able to turn intangible, rendering normal defeat impossible. Shurelia therefore sends Lyner on a quest for the only thing that can help them: the Hymn Crystal Purger. Taking an airship, he travels down to the Wings of Horus, the Floating Continent that surrounds the tower. More accurately, he crashes thanks to an attack from a dragon, which complicates matters extremely.

In the process of searching for the crystal and a way to repair his airship, he meets and teams up with a number of people, including two Reyvateils. First is the shy Aurica, who healed his injuries after his crash. Second is the more outspoken Misha, actually his Forgotten Childhood Friend. But there's one problem - Misha looks much younger than she should be. Aside from those two are the wanderer Jack, the local church knight Radolf, and the airship grathmelder Krusche. As the story progresses, Lyner and his comrades not only try to find the Hymn Crystal and fix Lyner's airship, but discover the reason for Misha's youthful appearance, and the source of the recent Virus outbreak.

The first game also has a single-episode OVA adaptation, which focuses on Lyner's crash and desire to return to Platina. Due to time constraints, the details of the plot are largely condensed and simplified, with other elements left out entirely.

Tropes about the sequel, Ar tonelico II: Melody of Metafalica can be found on its page.

Ciel nosurge, the first game in the Surge Concerto prequel series, has its own page too.

All the games have a number of drama CDs devoted to the heroine Reyvateils (and some other people besides). Some of the cast went on to have parts in the crossover game Cross Edge. There also exists a manga, set in Sol Ciel, titled Ar tonelico: Arpeggio.