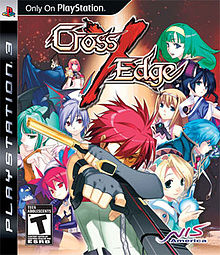 Cross Edge (sometimes stylized as X Edge) is a Massive Multiplayer Crossover Tactical RPG developed by Idea Factory and Compile Heart. It was released in 2008 for the PlayStation 3, and published in North America by Nippon Ichi and by Koei in European territories. It is the first Capcom crossover outside of the Marvel and SNK games to be ported to American shores.

While the game does feature a few playable Capcom characters, it has more in common with Namco × Capcom than the Capcom vs. series, as the former is a turn-based strategy RPG.

A character sheet is in the making. Please keep it to Cross Edge-original characters.