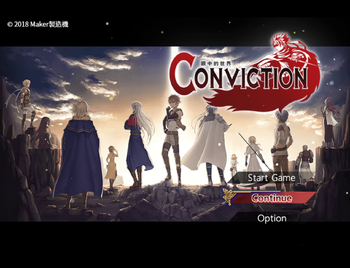 Conviction (眼中的世界 - Conviction -) is a Strategy RPG made by chimaki using RPG Maker MV., The author released an early access version on Steam in 2019, with a full release in February 2021.
Advertisement:

Ire is the hotheaded champion of Lassla village, who wishes for adventure outside of his home. He soon gets his wish when he convinces Leed, the chosen of the Light Elf, to recruit him in the quest to seal the Dark Elf and restore balance to the continent of Elwes. Unfortunately, the Abyss Empire is being controlled by the Dark Elf and the emperor is brainwashed into thinking that he must conquer the continent to bring peace, meaning Ire will have to betray his country in order to complete this mission.

Gameplay-wise, Conviction plays like Langrisser in that powerful commanders lead scores of weaker troops, who receive stat bonuses by being in the commanders' command range. If a commander falls, their troops will immediately flee from the battlefield, but EXP is only rewarded for killed units rather than retreated units. All campaigns are one-time events, meaning the player has to strike a balance between killing a lot of troops and killing enemy commanders quickly.