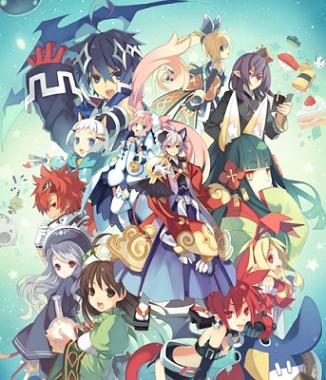 Trinity Universe is a Massively Multiplayer Crossover RPG created by Nippon Ichi, Idea Factory and Gust Corporation for the PlayStation 3 in 2010. Oddly, it's a little short on the massive, with only a handful of guest characters from two series, Atelier and Disgaea. It is noteworthy for being the first time characters from either of those series have appeared in 3D polygon form. The game owes a lot to Cross Edge, with large chunks of its battle system and bestiary being lifted directly from the former game.

Trinity Universe take place in the Netheruniverse, where space debris and odd junk drifts to. The city of Empyria is located in the middle of it, protected from impacting space junk by the Demon God Gem, which requires sacrificing a member of the royal family to create. The latest sacrifice, Kanata, has broken free and is looking for another solution, when he's not getting distracted. Meanwhile, Rizelea, a Valkyrie, is investigating the cause of the drifting space junk as well as chasing after Kanata to force him to become Demon God Gem.

The gameplay is pretty standard, but the writing and characters are memorable and funny. Note that it has nothing to do with White Wolf's tabletop RPG series.