Anime / Sound of the Sky 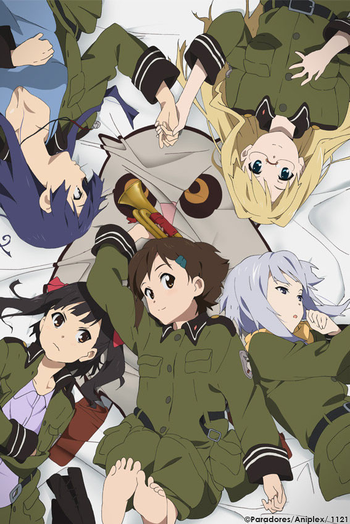 From the top-left, clockwise: Rio, Filicia, Noël, Kanata, and Kureha
"This sound strikes a chord. Whether in Rome or Helvetia, it is the same."
— Kanata Sorami
Advertisement:

Sound of the Sky (So Ra No Wo To) is an anime that aired in the winter of 2010 and was directed by Mamoru Kanbe. Produced by Aniplex as a part of TV Tokyo's Anime no Chikara project, it is an Anime First, and follows fifteen-year-old Kanata Sorami, who joins the 1121st platoon of the Helvetian Army in the town of Seize. So Ra No Wo To was streamed on Crunchyroll and Funimation, although it was delisted from the former in 2021. In 2011, Nozomi Entertainment released it on DVD

as Sound of the Sky, the English translation of the series title.

At a young age, Kanata was inspired by a trumpeter's rendition of "Amazing Grace", and thereafter, decided to become a bugler. While on her way to the Clocktower Fortress, Kanata loses her way and stumbles into a festival dedicated to the Fire Maidens, who saved the town from a fire-breathing demon in a legend from a forgotten age. As the other platoon members train her to be a bugler, Kanata's own cheerfulness and innocence, drives the other members to find their own happiness in a world devastated by conflicts.

Over the next year, Kanata adjusts to life at the Clocktower Fortress, learning more about music and the events that shaped the world around her, all the while brightening up her brigade's day. The series follow their misadventures, from exploring the pasts of her friends, to saving the townspeople from a huge storm, and finally battling the sadistic antagonist, Colonel Hopkins, who wants war to break out for his own pleasure. Even as the calm in Seize gives way to the threat of war, Kanata's optimism brings the legend of the Fire Maidens to life once more.

Sound of the Sky provides examples of:

Alternative Title(s): So Ra No Wo To