Anime / Liz and the Blue Bird 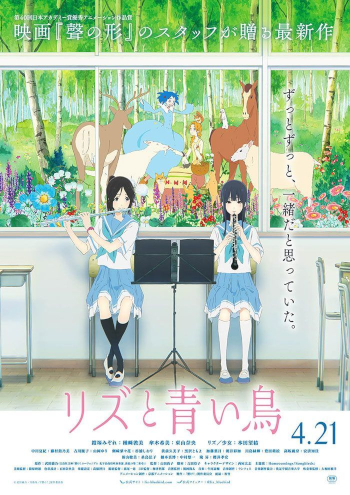 "I thought we would be together forever and always."note Mizore and Nozomi are in the front, Liz and the blue bird are in the back.
Advertisement:

Liz and the Blue Bird (リズと青い鳥, Liz to Aoi Tori) is a movie directed by Naoko Yamada and released by Kyoto Animation to Japanese theaters in 2018. It is a spin-off of the novel and anime series Sound! Euphonium, but it still functions as an independent work that can be enjoyed without prior knowledge of the original story (although some of the in-jokes may be lost on the uninitiated). It wonderfully captures the emotional bustle of adolescence by linking it to the classical piece played by the main characters, and the animated sequences representing said piece interspersed throughout the movie.

Mizore Yoroizuka is a shy and withdrawn high school student at Kitauji High, who spends her days minding her own business while not interacting much with the other students. Her only friend is Nozomi Kasaki, who broke through to her in middle school by asking her to join band. Mizore is immediately taken by Nozomi's outgoing and cheery personality, and soon finds herself playing the oboe, a difficult instrument for beginners, but one for which she appears to possess an extraordinary amount of talent.

Mizore starts spending a lot of time trying to master her instrument, driven not only by her desire to become a better musician, but also as a way of connecting with Nozomi, to whom she becomes ever more emotionally attached as time passes. Nozomi, herself a proficient concert flutist, ends up quitting in her first year of high school without telling Mizore; the two reconcile after she rejoins the band, but their relationship is on fragile footing as a result.

Now in their third and final year of high school, the two girls find themselves preparing an oboe-flute duet in a tone poem based on the children's story "Liz and the Blue Bird," about a lonely girl named Liz who befriends and lives with a blue bird turned into a human girl, until the two are suddenly forced to part ways. As Mizore and Nozomi try to get to grips with the work, they realize that their relationship resembles the one in the story, and soon they find themselves in the turmoil of trying to work out what music means to each of them, and especially what they mean to each other.

For character tropes on Nozomi and Mizore, see the Sound! Euphonium character sheet.