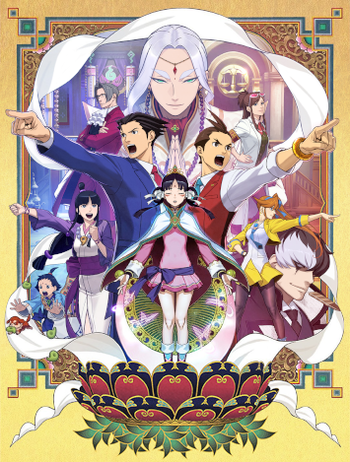 Justice at home and abroad...
"Even when wounded, a dragon bites down hard, and never lets go till its dying breath. It glares, it roars, and it latches its jaws firmly onto its prey till the bitter end. That's what lawyers do to get to the truth!"
— Dhurke Sahdmadhi, "Turnabout Revolution"
Advertisement:

Phoenix Wright is on a trip to the Kingdom of Khura'in to visit his old friend Maya Fey, who is currently on a training expedition there. Knowing it'll be a few days before he can see her, Phoenix takes an opportunity to tour the local area, but his 9-year old tour guide, Ahlbi Ur'gaid, is suddenly arrested on the charge of murder. Phoenix decides to sit in on the young defendant's trial, but he is shocked to find that their nation's court system does not use defense attorneys in their trials. Instead, the prosecution indicts suspects, and the court then relies on mystic oracles to presume the defendant's guilt or innocence. Unwilling to let such a ridiculous notion stand scrutiny, Phoenix leaps to his tour guide's aid and offers his defense amid heavy resistance from both the audience and even the defendant himself. Also participating in the trial is the mystic princess Rayfa Padma Khura'in, daughter of Queen Ga’ran Sigatar Khura’in, in a unique role: not as prosecutor, witness, or judge; but to conduct the "Divination Séance," a ceremonial dance that can channel the visions of the victim through the "Pool of Souls". Phoenix soon gets wrapped up into a plot involving a revolution led by the shadowy Dhurke, and a corrupt justice minister by the name of Inga who hates lawyers.

While Phoenix deals with the attorney-less justice system of Khura'in, the other lawyers of the Wright Anything Agency, Apollo Justice and Athena Cykes, are left to handle business back home, with Apollo in particular learning to stand in court on his own. However, as Phoenix left for Khura'in, Khura'in comes to Apollo and co. in the form of international prosecutor Nahyuta Sahdmadhi, a monk who sees attorneys as obstacles preventing murder victims from resting in peace.

Key to the game is the new "Divination Seance" gameplay mechanic, which is how the court system of Khura'in renders its verdicts, namely by conjuring images of the last things the deceased saw or felt before their death. The defending attorney can then examine the "footage" of the event and pick out inconsistencies either from within the vision itself or with evidence of the crime. The five strike penalty system from the first game returns (compared to the "life gauge" system that has been in use since the second game). The developers have said that Phoenix has no new challenges left at home, so sending him to a new land would give him a new set of court rules to work with, reigniting the sense of urgency in court.

The game was originally announced on September 1, 2015 and appeared at the 2015 Tokyo Game Show in a playable form. The Japanese version launched on June 9, 2016 and arrived in English-speaking territories on September 8, 2016. As with Dual Destinies, only the Japanese release features both physical and digital releases, with the English localization being strictly digital via the Nintendo 3DS eShop. It was later released on the iOS and Android mobile platforms on September 21, 2017.

A character sheet for the whole franchise can be found here.

The TGS 2015 trailer can be found here (English-subbed)

. During March 2016, Capcom Japan launched a Twitter campaign to get as many Tweets as possible about the game, the prize for getting 18,000 Tweets being a special video, which was a short anime prologue. It can be viewed here (subbed)

. The final launch trailer can be viewed here (subbed)