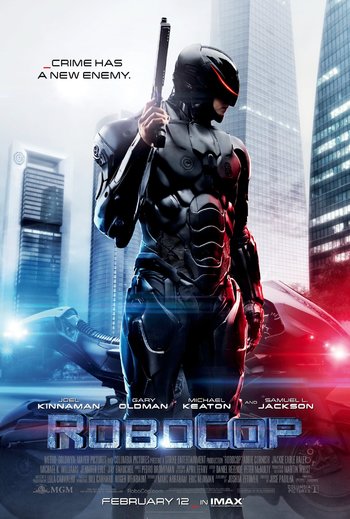 RoboCop for a new era.
Advertisement:

RoboCop is the 2014 remake of the classic cyberpunk film RoboCop directed by José Padilha of The Elite Squad fame. Joel Kinnaman stars as Alex Murphy, a Detroit Police Officer who is mutilated by a car bomb and resurrected as an unstoppable cyborg police officer by OmniCorp. Samuel L. Jackson, Gary Oldman and Michael Keaton play supporting roles.

Alex Murphy has Cowboy Cop tendencies that get him in trouble with Da Chief, because he acts on his hunches first. His justification in this case is that since he and his partner were investigating dirty cops, calling for backup would alert the guys they were after. Unfortunately, their attempt to nail the bad guys goes wrong and Murphy's partner Lewis ends up in the hospital.

The crime lord the dirty cops work for wants Murphy out of the picture as well, but with his hands clean, since cop killers get the enmity of the entire police force. The dirty cops do the dirty work for him, and tag his car with a bomb. It goes off, burning Murphy badly and damaging his eyes and ears from the concussion. Enter Omni Corp, who has been looking for a way to get their crime-stopping robots on the streets of an American city. The American people don't feel comfortable with a soulless robot who can't feel, so putting a human face on a robot seems to be the ticket.