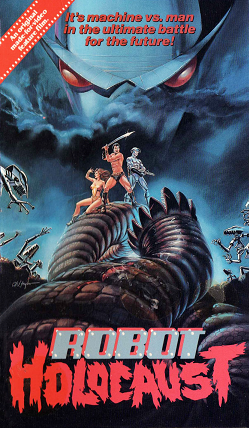 Robot Holocaust was a 1986 post-apocalyptic yarn by director Tim Kincaid, who was mainly a director of Gay porn films. It involves a world in the far-future after "The Great Robot Rebellion of '33", in which most of humanity & human civilization are wiped out. All that's left is a city called "New Terra" (played here by a fully functional New York City), which is ruled by the mysterious Dark One. The remaining humans become his "Air Slaves" & are forced to fuel the power station that keeps the Dark One alive & in charge. The Dark One has the power to clean the poisoned air & uses this as a means to control the "Air Slaves".

The film itself is horribly done with cheap, cheesy sets, no-name actors, horrible acting, poorly-written plot & script and bad special effects. It was the first modern, color film to be shown on the television cult classic comedy, Mystery Science Theater 3000 (barring the KTMA episodes) in one of the more memorable episodes of the First Season. For the said episode see here.