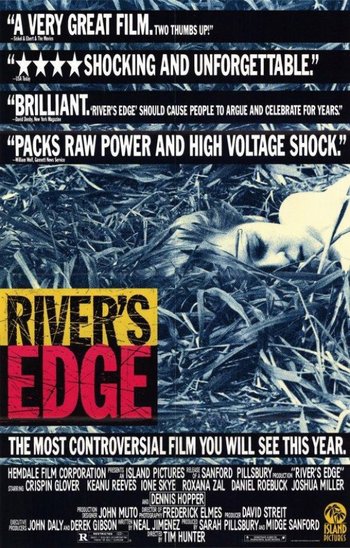 A 1986 teen crime drama film directed by Tim Hunter and starring Keanu Reeves, Crispin Glover, Ione Skye, and Dennis Hopper, Razor's Edge depicts a group of high school friends who realize that they are in the presence of a murderer.

John (Daniel Roebuck) shows up at school and tells his friends that he killed his girlfriend Jamie. At first none of the other teens believe him... until he shows them Jamie's corpse, left for days along the river's edge. The teen group then argues over what to do, finally settling on Layne's (Glover) plan to protect John since "Jamie's dead but John's still alive." This still doesn't sit well with Clarissa (Skye) or Matt (Reeves), and things get worse when the cops are finally told about Jamie's murder. Now Layne has a plan to hide John out somewhere while he goes and hunts down the one he thinks ratted John out...