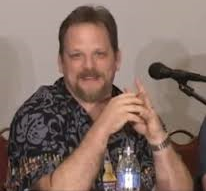 This is Nabeshin!!!
Advertisement:

Brett A. Weaver (born November 16, 1966) is an American voice actor born in Lafayette, Louisiana. In 1995, he was doing a children's theatre production with Amanda Winn in Houston, and she showed him Burn Up!. When Weaver opined that the show was crap, Winn dared him to go audition for an anime role himself, and so he did. He ended up receiving the role of Jonathan Washington in Gunsmith Cats, and have been voice acting ever since. He has a major in music and eight years of experience as a radio disc jockey. Weaver moved to Austin in summer 2000, catching the remnants of the dot-com bubble.

He likes to play Deadpan Snarker and Anti-Hero roles. Also he has a tendency to voice characters that end up dying over the course of the series, usually dramatically or a well-known death.