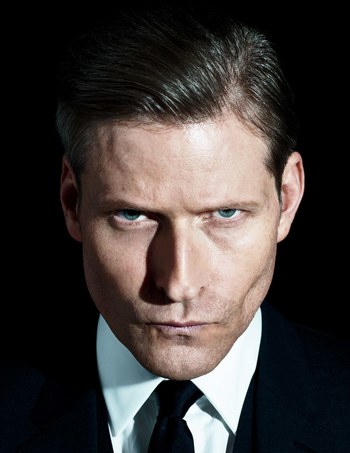 "It's like, you can't have any fun, and if you do have fun, if you do your own thing, you're considered crazy and should be in a mental institution. Now, that's what I find creepy. I'm eccentric. I am not messed up."
Advertisement:

Crispin Hellion Glover (born April 20, 1964) is an American actor, director, screenwriter, recording artist, publisher, and author. He is best known for playing eccentric characters onscreen, from the relatively harmless George McFly in Back to the Future to the murderous Willard in the 2003 adaptation of Ratman's Notebooks. He's also known for being very eccentric offscreen.

Worth noting is that Hellion is his legal middle name. His father, Bruce Glover, had previously used it as a false middle name because he didn't like his real middle name, Herbertnote Considering the amount of trouble in he caused with the Back to the Future franchise crew, they'd be inclined to think that name is appropriate.

He is the son of actor Bruce Glover. Not to be confused with Crispin Freeman.