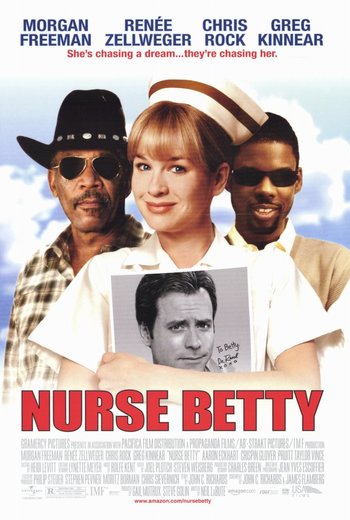 Nurse Betty is a 2000 Black Comedy film directed by Neil LaBute, based on a story by John C. Richards.

Traumatized as a result of witnessing the brutal slaying of her husband, Betty (Renée Zellweger), a small-town waitress and Soap Opera fan, enters a fugue state that allows—even encourages—her to keep functioning in a state of Alternate Universe. Now living out the fantasy life of the erstwhile Nurse Betty, she is set on returning to the love of her life, the lead character on Betty's favorite medical soap opera... the fictional Dr. David Ravell, played by actor George McCord (Greg Kinnear).

What she doesn't know is that her husband's hitmen, Charlie (Morgan Freeman) and Wesley (Chris Rock), are after her next.