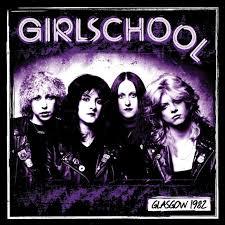 Often considered the Distaff Counterpart to Motörhead, Girlschool formed in 1978 right around the time the New Wave of British Heavy Metal was taking form. They are still going strong after more than 35 years, making them the world's longest running all-female rock band. They boast a global cult following and remain an influence and role model for many female rockers, both professional and amateur. In spite of suffering a bad case of Revolving Door Band, original members Kim McAuliffe and Denise Dufort are still part of the band. In fact, the only reason the full original lineup is no more is due to lead guitarist and singer Kelly Johnson's death from cancer in 2007. The band parted ways with original bassist Enid Williams (again), and recruited Tracey Lamb (again) in 2019.