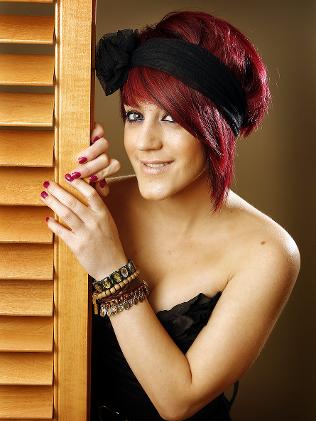 I cast a spell on you...
Advertisement:

Giulietta Russo (born 12 November 1992), known as just Giulietta, is an Australian dance-pop and R&B singer from Melbourne. She is also a dancer, actress and model who previously trained at NIDA.

She first came to prominence in 2008 after contributing vocals to the Marcus Knight club track "Dirty House Music". The song peaked at number four on the Beatport charts and entered the Australian ARIA Dance Charts twice. While she continued to sing on other club tracks such as "Venus", "Save Me", "Take Your Mind There" and "Give It Up", it was "Dirty House Music" and its underground success that caught the attention of US producer David Kershenbaum (a producer for artists such as Duran Duran, Tori Amos, Tracy Chapman and Cat Stevens as well as being responsible for signing Janet Jackson and Bryan Adams) — leading him to produce nine tracks for her debut album Ascension, released in 2010.

In November 2009, a little way from the album's release, Giulietta won ‘International Pop Artist of the Year Award’, ‘Producers Choice Award’ and a ‘Hollywood Walk of Fame Award’ at the Los Angeles Music Awards which took place in Hollywood. She later became the first Australian unsigned artist to reach the top 20 of the Billboard dance charts with the album's sole single, "Vertigo", which peaked at #16.

Apart from releasing her debut album in 2010, Giulietta supported Lloyd Banks (fom 50 Cent's posse G-Unit) while he was doing shows in Melbourne and also opened for the likes of Akon, Ja Rule, Ciara, FloRida, Stan Walker and Travie McCoy in the Melbourne leg of the Australian R&B and Hip-Hop festival Summerbeatz

. She also contributed scratch vocals on demo tapes for a possible Ciara album.

Her second studio album, a free set distributed through SoundCloud titled 911: Code Pink, was released in July 2012. Her third album, XXVI, was released in early 2015 (though good luck trying to find it). Her fourth album, Bandit, was released in November 2016. New music has been in development since the beginning of the COVID-19 pandemic.