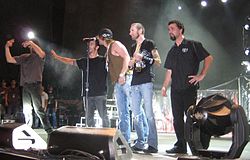 Godsmack is a Alternative Metal and Hard Rock band consisting of:

Erna was a drummer since the age of 3, and wanted to form a new band in which he would sing rather than play drums, resulting in this band. The name is partly inspired by Alice in Chains' song "God Smack", as well as an In-Joke about someone with a cold sore on his lip. After independently releasing an album and becoming a live favorite, the band signed to Republic/Universal and released their professionally-produced Self-Titled Album (a remastered and restructured version of their debut).

Many metalheads hate them, often calling them out as Alice in Chains ripoffs, but many will contradict this statement. It's hard not to hear that they sound like them, but they have enough elements of their own to create their own radio-friendly style of metal.

In February 2014, Godsmack began writing for their long-awaited sixth album. It came out in August of that year, and is called 1000hp.