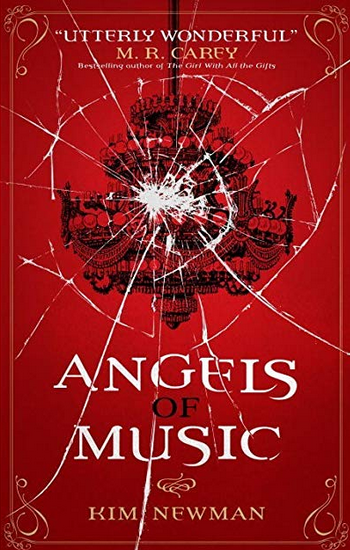 Towards the end of the seventies—that colourful, hectic decade of garish clothes, corrupt politics, personal excess and trivial music—three girls were sent to the Paris Opéra.
Advertisement:

Angels of Music is a 2016 novel by Kim Newman. It transposes the premise of Charlie's Angels into a 19th-century Massive Multiplayer Crossover, depicting a detective agency founded in the 1870s by a secretive genius who lives beneath the Paris Opera House, with his protegée Christine as one of the founding agents alongside Trilby O'Ferrall and Irene Adler.

The novel is divided into five "Acts", each depicting an adventure from a different period of the Opera Ghost Agency's operation and featuring a different line-up of Angels. (Later Angels include Elizabeth Eynsford Hill, Gilberte Lachaille, Sophy Kratides, a vengeful Japanese lady named Yuki, and Newman's own Kate Reed, among others of more obscure origins.) There is also one shorter story, described as an "entr'acte" (the term for a piece of music written to be played in the intermission between acts of an opera).

Angels of Music features the same version of Irene Adler as Newman's earlier The Hound of the D'Urbervilles, and has guest appearances by several characters from the Diogenes Club series; Newman has confirmed that all three are intended to "loosely" share the same setting.