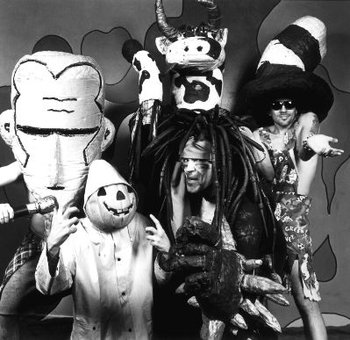 Green Jellÿ is a comedy/punk/metal band started in 1981 by an eccentric individual named Bill Manspeaker. They were originally named Green Jello, until they were sued by Kraft Foods in 1992. You may remember them by their 1992 hit single "Three Little Pigs", a somewhat... interesting take on the well-known nursery rhyme. Although they started back in the early '80s, they reached their peak in the early-mid '90s with their albums Cereal Killer (1991) and 333 (1994), before disappearing forever...

...or at least that's what everyone thought, because they never fully disbanded, and in the 2000s they began touring again. Their latest album, Musick To Insult Your Intelligence By, was released in 2009, although it had been recorded in 1995. The band is currently working on an upcoming fifth album titled Green Jellö Nursery Crimes.

They are known for being intentionally cheesy, calling themselves "the worst band in the world" and using the slogan "GREEN JELLO SUXX!!", as well as incorporating homemade puppets and weird characters on their stage shows. They've had loads and loads of lineup changes, with frontman Bill Manspeaker being the only constant member since the beginning.

Tropes To Insult Your Intelligence By: