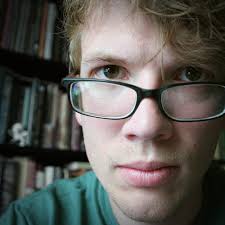 Who the eff is Hank?

William Henry "Hank" Green II (born May 5, 1980), better known as just Hank Green, is an American entrepreneur, musician, and internet vlogger; best known as one half of the VlogBrothers (along with his brother John).

Hank is one of the most active and prolific leaders of a new generation of web entrepreneurs and personalities. He's the co-founder and CEO of VidCon, the world's first and only convention dedicated to internet videos. He along with John are the organizers of the event. He is also the inventor of 2D glasses

; publisher of Ecogeek.org, an environmental technology blog; developer of Subbable, a crowdfunding service similar to, and recently absorbed by, Patreon; Vice President of the Foundation to Decrease World Suck, and the co-founder of DFTBA Records.

In 2018, he released his debut novel, An Absolutely Remarkable Thing. This was followed by a sequel in 2020, titled A Beautifully Foolish Endeavour.

This musician/internet vlogger and his works provide examples of:

"John, I will see you on Tuesday."