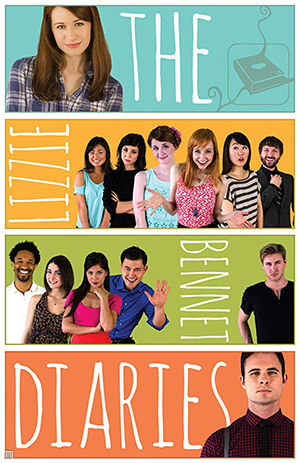 "I'm all for rich, single guys, but who is my mom to tell one of us who to marry?"Top to bottom, left to right... Lizzie, Maria, Mary, Jane, Lydia, Charlotte, Ricky, Fitz, Gigi, Caroline, Bing, George, and Darcy.
"My name is Lizzie Bennet, and this is my Vlog Series Setting Update of Pride and Prejudice!"
Advertisement:

Lizzie Bennet is a normal young woman, pursuing a Master's degree in communications and desiring nothing more than to be her own person. This is in clear contrast to her mom, who just wants to get Lizzie and her two sisters married off to someone rich as soon as possible. She even got them all shirts saying "It's a truth universally acknowledged, that a single man in possession of a good fortune, must be in want of a wife." Lizzie doesn't buy it, and is going to explain exactly why to the whole internet in the form of video blogs.

When the handsome and rich Bing Lee moves into town, with his infuriatingly snobby and even-richer friend William Darcy in tow, Lizzie's life is thrown into disarray as her entire family starts clamouring for his attention. Thankfully, armed with a camera, her friend Charlotte's editing expertise and a healthy dose of snark, Lizzie is ready to document this social catastrophe as it unfolds.

If you haven't realized yet, this is a modernized Vlog Series adaptation of Pride and Prejudice, written by Bernie Su and produced in part by Hank Green. Though it's scarcely the only update of P&P, what was surprising was the exciting and devoted fan reaction: the show boasts close to 200,000 YouTube subscribers and its DVD release raised 500% of its goal on Kickstarter within just one week of its month-long fundraising drive. It can be found on YouTube

. Oh, and then it won an Emmy for "Outstanding Creative Achievement In Interactive Media - Original Interactive Program," which is pretty darn impressive.

There is also a novelization of the series called The Secret Diary of Lizzie Bennet, which consists of her written diary from the same time period. It serves partly as a novelization and partly as a companion piece to the videos, often expanding in greater details upon subjects that for practical reasons are only hinted at in the videos. This novelization also got a sequel, The Epic Adventures of Lydia Bennet, which is narrated by Lydia and focuses on her life after the events of the series.

It has started a trend of Setting Updates diaries appearing on YouTube, both professional and fan made. The Autobiography of Jane Eyre referenced the LBDs in its first episode and its authors cite it as their inspiration. Meanwhile, it's been followed by its own Spinoffs: Welcome To Sanditon follows Gigi Darcy in her adventure to a beach resort Sanditon, beta-testing the "Domino" application, which records, auto-edits and auto-uploads video monologues and dialogues, and covering Austen's unfinished last novel Sandition. Another spinoff, Emma Approved, launched in October 2013, chronicling through Domino the adventures of Professional Shipper on Deck Emma Woodhouse. And they have branched out of the world of Austen with Frankenstein M.D., following the career of the bioethically-challenged Victoria Frankenstein; and with The March Family Letters concerning the daily shenanigans of the March Sisters.

"Well, that will certainly make the costumes easier to obtain."