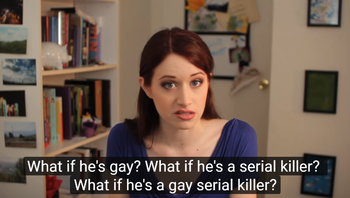 And you thought our theories were crazy? Lizzie out-wild-mass-guesses us all.

Then, she will tell Bing and Darcy, and Darcy will convince his friend to throw them out as soon as they can get back in their home. In a twist, Lizzie and Jane's more conservative and innocent behavior will have put the family in a bad situation, and Lydia videotaping her almost-date with a famous married actor (the newly famous George Wickham, who will play the main role in a vampire-vs-werewolf movie) will save them, showing society as it is today, and taking a different way than the book did.

Charlotte is secretly in love with Lizzie

This is why she accepts to edit her videos and tried to kiss her, and also why she looks so pessimistic: she knows Lizzie is straight, and even wants her to be happy with Darcy if she can... or as a true Magnificent Bastard, she created the vlog to alienate the Bennet sisters from boys by ridiculing them, and hijacked the vlog to make Lizzie feel more uncomfortable with Darcy's building feelings for her.Lizzie didn't remark anything because she is a terrible, Horrible Judge of Character and she is oblivious to Charlotte's love.

She was sick after the party and her momentary absence and ate a lot during the shooting of the video.

Like in Lost in Austen, Caroline is homosexual, but without necessarly being in love with Lizzie. She has come to terms with it and doesn't repress her personality to fulfill highly complicated social standards, thus she is a Nice Girl. Because in the modern world, she can be openly a member of LGBT.

Lydia will have a happier ending

Like in Lovestruck in Bollywood / Bride and Prejudice, she will be saved before running off with Wickham, and everything may be fine for her.

We won't see Darcy in the vlogs

Until one day he comes running into Lizzie's room (or wherever she's filming at that moment) to propose/ask her out.

The letter will be a video response

Darcy is going to make a video response instead of writing a letter. This will also be the first time we see him.

Wickham only looks stupid, he is much more clever than he looks.
He seems to try to invoke Lovable Jock and The All-American Boy as if he was unaware of his appeal to some viewers and was genuinely unable to manipulate anyone. He is (in-universe) trying to make Lizzie think that she is the most clever so that she ends up thinking she knows everything about him, while using her fans who subscribed on his tweeter account as his own fans/a new dating pool.
Jane is helped to dress by woodland creatures
Come on, the girl practically radiates sweetness and light. They probably help her at her job designing clothes as well.
Darcy is a Smiths fan
Listen to "How Soon Is Now", what other music would he listen to. Nothing modern unless he was doing it ironically.
Lizzie is afraid of commitment
Her parents's lack of understanding of each other's feelings, and her mother's focus on finding her a husband for money make her fear romance from the moment it becomes serious, hence the lack of boyfriend Lydia mocks. So, when she finds George Wickham, who obviously just wants to flirt, she is relieved and likes him a lot, forgiving all his mistakes. When Darcy tries to seriously court her, she enters in denial and subconsciously projects everything she hates on him.
Mary in LBD is not just the adaptation of Mary Bennet from the novel
She's actually a Composite Character of both Mary Bennet and Elizabeth's Aunt Gardiner. Ignoring the fact that Lizzie always forgets about Mary, let's have a look: Aunt Gardiner signs herself off as M. Gardiner (which could be M for Mary), plus her boyfriend's name is Eddie - and in the novel, Aunt Gardiner's husband is Edward Gardiner. Perhaps Mary is due to meet Darcy as well...?
Mr. Collins isn't being entirely truthful about his fiancée.
Lizzie's visit to Pemberley will be a visit to Darcy's company
Gigi will post the letter on her Youtube account
Well, Lizzie's still reluctant to post it. And they've got to do *something* with that account of hers.
The video diaries are a scripted vlog series that are based off of the kind of plot that Jane Austen would write.
It's kinda crazy, but think about it.
The series will end with Mrs. Bennett walking in
Everyone will have gotten their happy ending, and an ecstatic Lizzie will sit down to do one more video, summing up everything she's learned. Just as she's about to sign off, as Jane/Darcy/Mr. Bennet tries frantically to dissuade her, Mrs. Bennet will peek in and ask, "Lizzie, what are you doing in here?" Lizzie will panic and turn to the camera with wide, guilty eyes.
Lizzie is a troper
She is a Bookworm and Miss Imagination. She loves fiction analysis, after all, she is a Communications Major. She must be literally One of Us — a fellow troper!
The energy corporation that folded when Lydia was 10 was Enron
If Lydia turned 21 in 2012, she would have been 10 in 2001. That was the summer Enron folded like a house of cards.
Ricky - we mean, Mr. Collins - will play the part that Catherine De Bourgh did in the book.
He'll come and lecture Lizzie about getting into a relationship with Darcy. People have speculated it might be Caroline, but Ricky has turned up again on twitter in the critical week, and he makes more sense. He might even be the one to tell Lizzie about Gigi's videos and Darcy taking the website down, although probably not. That will likely still be Lydia.
The in-universe reason that the videos will stop is...
The next webseries from the LBD team will be an adaptation of Emma
Gigi is a shipper and a self-proclaimed expert in romantic meddling. The use of Domino is for being nosy and shipping real people. It's a known fact that the writers are working on a new Setting Update show. This heavy focus on shipping and meddling might be a mere foreshadowing of Emma project. Alternatively, Emma might be a character who will be using the Domino app. Other viewers have speculated that Emma's role will be taken by Gigi Darcy in the same vein as Gigi took the role of Charlotte Heywood in the spin-off show Welcome To Sanditon. The best speculation appearing among comments on Youtube was that the next webseries will be Emma, and the main character will be played by Domino.
The series’ Darcy is descended from the book’s Darcy