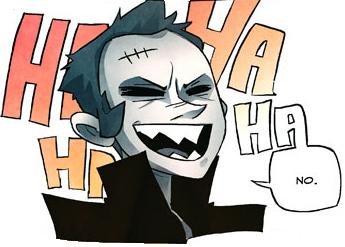 When a character, either feigning genuine laughter or being obviously sarcastic, pretends to laugh along with other characters, or encourages/threatens them to do so, then abruptly tells them to shut up, in one way or another. The rejection can be a quiet aside, an unexpected tirade or anything in between. Sometimes, this is in concert with a Laugh with Me! moment.

Compare Pre-Violence Laughter and contrast Tension-Cutting Laughter. The trope also applies to situations in which somebody finds something that somebody else is saying Actually Pretty Funny, but this amusement isn't changing anybody's mind. The non-laughing version is "No. Just... No" Reaction. The denial/rejection can be a Blunt "No". Compare Last Note Nightmare.