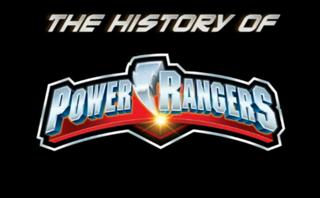 The History of Power Rangers is a web series created by Linkara of Atop the Fourth Wall as a fun side project. Being an older fan, he decided to review each season of Power Rangers and break down the elements of the story. It isn't a video review in the same style as many other web reviewers, but largely Linkara doing a voiceover of the footage while pointing out elements and features he feels are noteworthy, with the occasional Fun with Subtitles or messing with the conventions of the format. The videos have grown in running time due to how complicated the series became later on (as well as his lack of familiarity with later series going in), between three and four parts pushes into 2 hours of commentary. He acknowledges that even with more time, there is likely to be something he forgets to mention.

started in April of 2010 and, partially due to Linkara's own familiarity with the early seasons, the early videos came out fairly regularly. He knows how intimidating the project is and has made it clear that there is no set schedule for the release of each installment as he also has to worry about his social life, his work on Atop the 4th Wall, conventions and crossovers with fellow reviewers on Channel Awesome note Least at the time he started, he's left the site past the Dino Charge review since then though occasionally does a collab with others (it started out about once a week, grew to about 3-4 months and the gap between Mystic Force and Overdrive was around a year and a half). And as he has not watched each season when it first aired, most of the later seasons have him reviewing it from a fresh perspective. Taking into account writing notes, selecting clips, editing, and doing the voice work, it's a colossal task indeed. But one he does out of a labour of love for the franchise.

It must be noted that he is not reviewing the series based on how well it adapts Super Sentai. It would not only require him to watch the Super Sentai counterpart, but he also feels that any season should be able to stand on its own accord. He does seek to research various topics like the origin of the Super Sentai footage and behind-the-scenes material, but such information is not always reliable, and he doesn't use it as a hard fact. He brought this up during Mystic Force, as fans kept asking.

The following lists are the tropes he uses in each series review, as well as tropes he points out that those series use.

The most current review thus far is of Power Rangers: Beast Morphers, which was completed while Dino Fury had just begun. Linkara has announced

that since the series will be completely caught-up, new episodes will only be released after a new season has aired in its entirety and the official DVDs are released (assuming seasons are normally split into two mini-seasons and that the DVDs are released on time, a new episode about every two years). There are also possible episodes depending on Patreon requests, and will likely focus more on Power Rangers "copycats" like Masked Rider, Beetleborgs, VR Troopers, and Tattooed Teenage Alien Fighters from Beverly Hills. He's also going back and addressing the mistakes he'd made in earlier videos and has tentatively announced that he plans on remastering all the previous episodes of HOPR up to Operation Overdrive.

The video playlist for the entire series of reviews (totaling a whopping 35 videos, not counting the redone videos done after the Beast Morpher review) can be found here