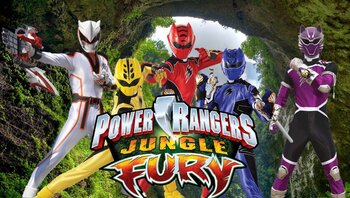 Power Rangers Jungle Fury is the 16th season in the Power Rangers franchise as well as the 6th incarnation of Power Rangers to come from Disney, adapted from Juken Sentai Gekiranger.

Millennia ago, an evil spirit known as Dai Shi waged war to determine whether man or beast would control Earth. A group known as the Pai Zhua (aka "Order of the Claw") won the war for humanity and imprisoned Dai Shi, appointing new guardians every generation to watch over his prison.

Unfortunately, the masters never thought to put a lock on the prison, and Dai Shi escapes when the box is knocked over. The three current guardians are directed to a Pai Zhua master in Ocean Bluff, a city close to Dai Shi's old lair. With Dai Shi weakened and the guardians still just students, both sides have to seek out the masters who fought in the Beast War and hone their skills before their enemies can destroy them. Fortunately, one of the masters contacted "a guy who knew a guy who had an uncle" who had access to some very familiar tech to help turn the tide...

This was the final season to be produced under Bruce Kalish, bringing an end to his divisive tenure. Though Disney considered pulling the plug on the franchise with his departure, Bandai successfully lobbied for another season due to contractual obligations. It was also the first season since Power Rangers Turbo to not give any ranger a battlizer; instead, its budget went into creating three original Rangers who appeared in the toyline, but never Gekiranger—namely the Elephant, Bat, and Shark "Spirit Rangers". It also made history by giving the show its first ever canonical Purple/Violet Ranger (the Wolf Ranger—but hey, Sixth Rangers can get away with not having a Color Character name).

Although the series had no team-ups (making it for a long time the only season to not have any connection with past or future seasons outside of a Jungle Karma Pizza sign in the next season), Casey returned in the Milestone Celebration season, Power Rangers Super Megaforce. His actor, Jason Smith, even wrote some episodes for the season.