My spirit doesn't make me stronger. I make my spirit stronger. 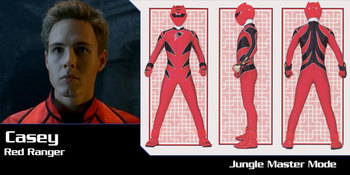 Casey was a cub at the Pai Zhua Academy, but after defending a peer from Jared's bullying, Master Mao named him one of the three chosen warriors to protect the world against Dai Shi. Despite his inexperience compared to Theo and Lily, he was named the Red Jungle Fury Ranger due to his tiger spirit. 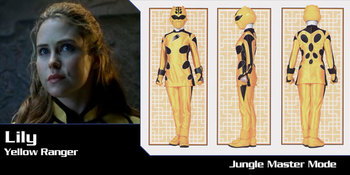 Lily was a student at the Pai Zhua Academy, and was named one of the three chosen warriors to protect the world against Dai Shi by Master Mao. She was named the Yellow Jungle Fury Ranger due to her cheetah spirit.

My mind is a well-oiled machine. It can juggle two jobs, read a book and save the world - all before the lunch rush. 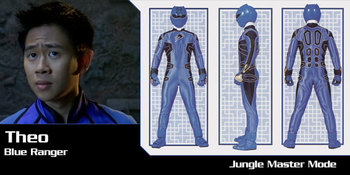 Theo was a student at the Pai Zhua Academy, and was named one of the three chosen warriors to protect the world against Dai Shi by Master Mao. He was named the Blue Jungle Fury Ranger due to his jaguar spirit.

Remember, guys! The enemy is merciless. And just as graceful as - (falls over, springs back up) Me! 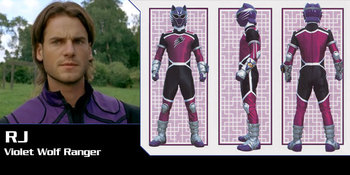 R.J. was a Pai Zhua Master with the spirit of the wolf, and ran his own pizza place called Jungle Karma Pizza. After Master Mao died, the three Rangers came to him to be their new mentor and he provided the trio with their powers, a place to live, and jobs at his restaurant. Eventually, he joined his students as the Wolf Ranger. 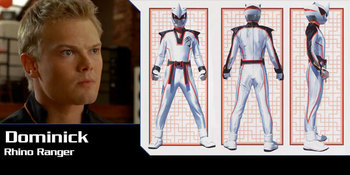 Dominic was a Pai Zhua student, but left after Master Mao's urging to find his way. Making his way to R.J., his prankster attitude made him weary in the Rangers eyes, but after saving Fran from a monster attack, he joined them as the Rhino Ranger.
Their Friends 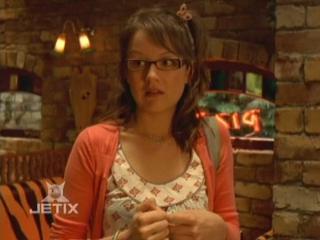 The grand master of the Pai Zhua Academy.

A Pai Zhua Master with the spirit of the Elephant.

A Pai Zhua Master with the spirit of the bat.

A Pai Zhua Master with the spirit of the shark. He's also R.J.'s father.

A deceased Pai Zhua Master with the spirit of the gorilla.

A deceased Pai Zhua Master with the spirit of the penguin.

A deceased Pai Zhua Master with the spirit of the antelope.

After the Phantom Beast Generals were unleashed, Dai-Shi had them capture the Rangers' masters, and with the Crystal Eyes, he created the Spirit Rangers. While they initially fought against the Rangers, they fought with them after R.J. rescued the masters. 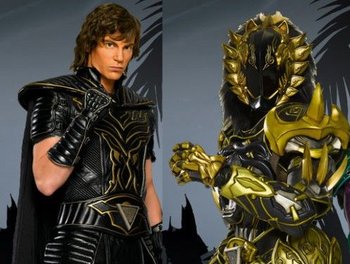 An ancient and evil eight-headed Chinese dragon that initiated the "Beast War", believing that humans should be destroyed and that animals should rule the planet. However, the Order of the Claw have him locked away in their temple. After generations of being trapped, Dai Shi was released after Jarrod, a recently expelled Pai Zhua student, accidentally released him. Dai Shi possessed Jarrod, and resumed his goal of destroying all humans. 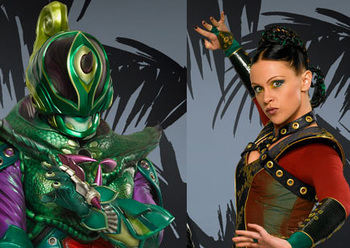 Dai Shi's loyal servant with the spirit of the chameleon. She can use her spirit to create a suit of armor for combat uses. 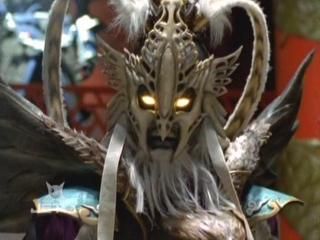 The Sky Overlord, the holder of the Hawk spirit, and a master of aerial martial arts. Dai Shi revived him in order to grow stronger. 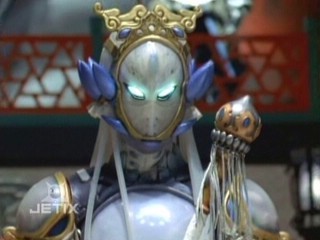 The Sea Overlord and the holder of the Jellyfish spirit. Camille revived her in order to train Dai Shi any further. 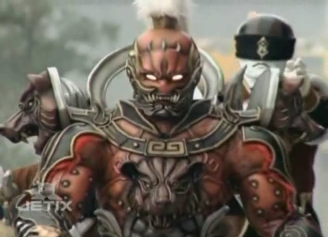 The Earth Overlord, holder of the Grizzly Bear Animal Spirit, and master of the power of Zocato. He was the final Overlord to be revived, but he took over the leadership from Dai Shi as he felt the latter was to blame for losing the Beast Wars and for inhabiting Jarrod. 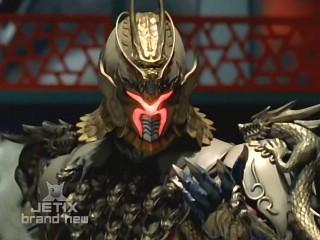 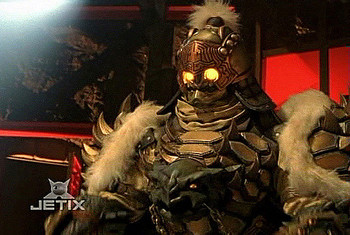 A Phantom Beast General that has the Snapping Turtle animal spirit. 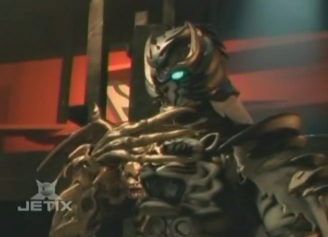 A Phantom Beast General that has the White Tiger animal spirit. 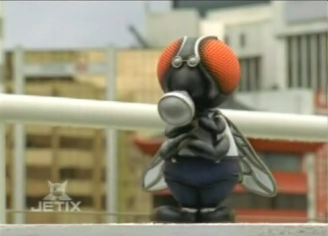 A former enemy of Camille whom she cursed, turning him into an anthropomorphic fly. He must stay inside her stomach or die from being outside for too long, but exits her to provide commentary for the Megazord fights.

Jiang Shi-like warriors that serve as Dai Shi's foot soldiers. A select few of them can be given animal totems and become Rinshi Beasts.
Rinshi & Phantom Beasts

Voiced by: Pat Courtenay
A praying mantis themed Rinshi Beast, and the first one that attacked Ocean City.

Five elite Rinshi Beasts that have mastery of poison.

Voiced by: Gerald Urquhart
A centipede themed Rinshi Beast and the first member of the Five Fingers of Poison to fight the Rangers.

Voiced by: Bruce Hopkins
A gecko themed Rinshi Beast and the second member of the Five Fingers of Poison to fight the Rangers.

Voiced by: Bruce Hopkins
A toad themed Rinshi Beast and the third member of the Five Fingers of Poison (along with Stingerella) to fight the Rangers.

Voiced by: Sarah Somerville
A scorpion themed Rinshi Beast and the third member of the Five Fingers of Poison (along with Toady) to fight the Rangers.

Voiced by: Richard Simpson
A cobra themed Rinshi Beast and the leader of the Five Fingers of Poison.

Voiced by: Robert Mignault
An eel themed Rinshi Beast sent by Camille to keep the Rangers busy while Dai-Shi trained with Carnisor.

A pair of robotic beetle themed monsters brought to life by Carnisor's powers.

A pair of robotic beetle themed monsters brought to life by Grizzaka's powers.

Voiced by: John Callen
An Catoblepass/boar themed Phantom Beast Warrior and the first of his kind to appear.

Portrayed by: Jason Hoyte
A human-mouse themed Rinshi Beast that trapped the Rangers in his Blow That Dough gameshow.