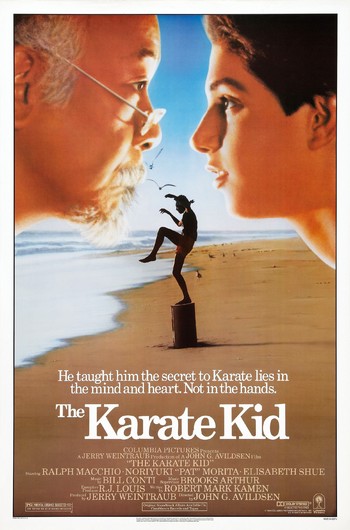 "I say, you do, no questions."
Daniel: So, you're supposed to teach and I'm supposed to learn! For 4 days I've been bustin' my ass, and haven't learned a goddamn thing!
Miyagi: You learn plenty.
Advertisement:

The first film in the The Karate Kid series, released in 1984.

Daniel LaRusso (Ralph Macchio) has just moved with his mother Lucille from New Jersey to Reseda, California. Daniel is overall a good kid, but his life takes a turn for the worse when he meets a girl that he likes, Ali Mills (Elisabeth Shue), only to incur the wrath of her ex-boyfriend Johnny Lawrence (William Zabka). Johnny happens to be the prize student of the Cobra Kai Karate dojo, whose sensei John Kreese (Martin Kove) encourages ruthless aggression. After their first meeting, which ends with Daniel being beaten badly, Johnny leads his gang into tormenting Daniel whenever possible.

Things come to a head with Johnny's gang chasing Daniel down and beating the hell out of him just outside his apartment complex. Coming to his rescue is the elderly Japanese handyman, Mr. Miyagi (Pat Morita). Despite his age, he defeats the Cobra Kai gang with ease, awing Daniel. After seeing that appealing to Kreese won't work, Miyagi agrees to train Daniel, but arranges a deal that the Cobra Kai will stop bothering Daniel if he enters an upcoming tournament, where he can fight the bullies on equal terms.

Daniel is hesitant about the tournament, but willing to learn karate at least to defend himself. The first few days Miyagi has Daniel do several chores: paint the fence, sand the decks and wax the car. Daniel endures it patiently, but eventually blows up at Miyagi for using him as a slave instead as a student. Miyagi then demonstrates what Wax On, Wax Off really means. Daniel is stunned, then begins to understand that Miyagi wasn't trying to teach him how to fight, but how to apply martial arts to his life.note And get some needed housework done as payment for training Daniel. He comes to learn that karate is about balance and self-respect, that martial arts should be used in discipline and not for aggression. Mr. Miyagi doesn't teach Daniel to be a vicious badass, but how to calm himself and deal with his problems as they come.

Cobra Kai serves as a Sequel Series to the franchise as a whole, but in particular to this film and the events that take place in it.

The Karate Kid contains examples of:

♫ You're the best around!
Nothing's gonna ever keep you down! ♫
Feedback

Example of:
So Last Season