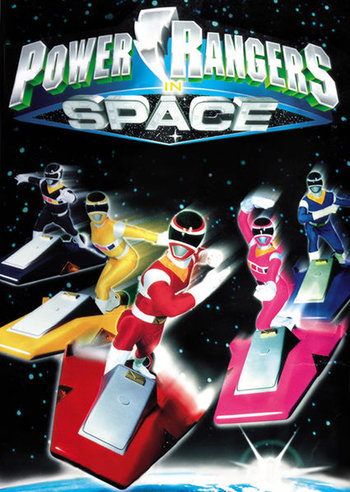 Managing to save the series from cancellation, this is frequently cited as one of the best, if not the best, seasons of the franchise. For the first time, the series introduced a heavily serialized plot that built from episode to episode, featuring strong themes, characterizations, and coming to an epic climax that gives a degree of finality to the previous six seasons. It also eschewed the Black-and-White Morality that was prominent in previous seasons by featuring sympathetic villains, and also includes three reunion episodes and plenty of cameos that kept the continuity extremely tight.

After being defeated by Divatox's forces, the Power Rangers lose their Turbo powers. However, following one of the contingency plans set down by Zordon before his capture, the Rangers make their way into space and (by chance) meet up with Andros, a lone Red Ranger determined to stop the U.A.E and rescue his missing sister, Karone. The former Rangers convince him of their worth and join forces with him as four new-coming members for his Ranger team.

Standing against them is Astronema, a Dark Action Girl agent of the U.A.E. sent to Earth to finish the job that Divatox started. With her is her Noble Demon second-in-command Ecliptor, the titular Doppelgänger Psycho Rangers and Card-Carrying Villain Darkonda. Meanwhile, the supreme leader of the U.A.E. and Big Bad of the Power Rangers universe, Dark Specter, is plotting to siphon Zordon's power to stage his final conquest on the galaxy, making it a race against time to rescue him before the universe is doomed.

The season ended with a blow-out finale for the entire "Zordon era" of the franchise, producing what remains on the sheer scale the biggest finale in PR history. This effectively wiped the slate clean for Power Rangers Lost Galaxy, as the staff and viewers went on to a new adventure that (for the most part) was unrelated to the events of the prior series.note (contains spoilers) Lost Galaxy would be the series that would officially adopt the Super Sentai format by introducing a new team and new conflict from the ground up, although Power Rangers maintained continuity; however, Lost Galaxy still featured more carryover elements than normal (beyond a reunion episode) like Alpha 6, Bulk, the Astro Megaship and Karone (Astronema) taking over as the Pink Galaxy Ranger.

Example of:
End of an Age