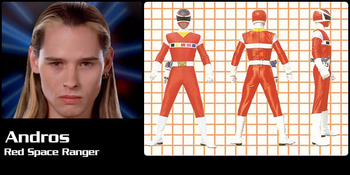 Andros was the Red Space Ranger, and the person searching for Zordon at the start of the season. While reluctant to work with the four former Turbo Rangers, he eventually allowed them to join him in his quest. His other goal is to find out the secret of his missing sister, Karone. 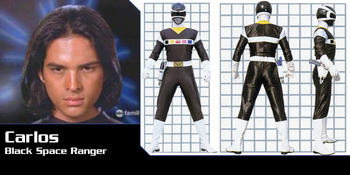 The former Green Turbo Ranger, Carlos along with his teammates (minus Justin) went to space after Zordon was captured. They soon met Andros, and Carlos became the Black Space Ranger. 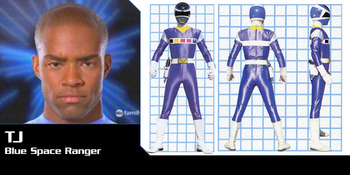 Portrayed by: Selwyn Ward
Voiced by: Benjamín Rivera (Latin American Spanish), Yuji Kishi (Japanese)
He gets it, alright. He just doesn't accept it.

The former Red Turbo Ranger, T.J. along with his teammates (minus Justin) went to space after Zordon was captured. They soon met Andros, and T.J. became the Blue Space Ranger. 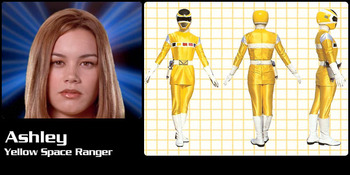 Portrayed by: Tracy Lynn Cruz
Voiced by: Mayra Arellano (Latin American Spanish), Sanae Kobayashi (Japanese)
Have you ever been to Earth before? Trust me, you're gonna love it there. There's beaches, music, there's the mall and everything!

The former Yellow Turbo Ranger, Ashley along with her teammates (minus Justin) went to space after Zordon was captured. They soon met Andros, and Ashley became the Yellow Space Ranger. 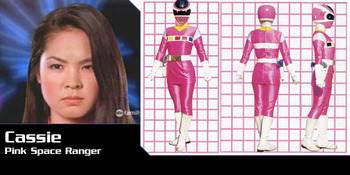 Portrayed by: Patricia Ja Lee
Voiced by: Rocío Prado (Latin American Spanish), Mioko Fujiwara (Japanese)
What affects one of us, affects all of us.

The former Pink Turbo Ranger, Cassie along with her teammates (minus Justin) went to space after Zordon was captured. They soon met Andros, and Cassie became the Pink Space Ranger. 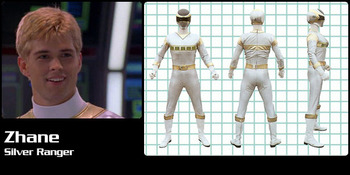 Years ago, Zhane fought with Andros as the Silver Space Ranger, but during an attack on KO-35, he was critically injured, and placed in a cryogenic pod. Two years later, Zhane would reawaken during an attack on the Astro Megaship, and joined his best friend and new teammates from time to time. 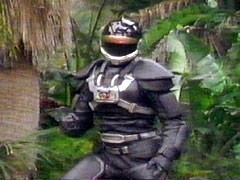 The mysterious Ranger from Turbo. 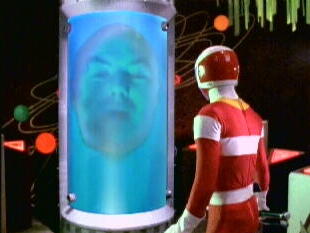 The original mentor to the Mighty Morphin, Zeo, and Turbo Rangers. Zordon was captured by the United Alliance of Evil. 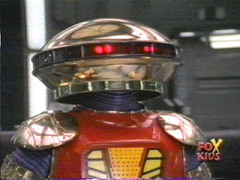 The robotic assistant of the Power Chamber. After the Turbo Ranger's defeat, he joined the four into Space, and after meeting Andros, he received a replacement voicebox after his old one broke, and became the caretaker of the Astro Megaship. 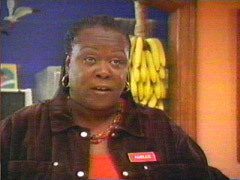 The owner of the Surf Spot. 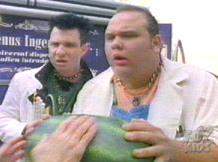 The comedic duo since Mighty Morphin, Bulk and Skull find themselves working for Professor Phenomenus in order to find extraterrestrial life. 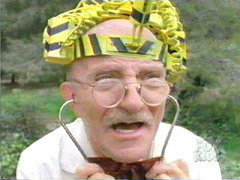 A scientist who specializes in alien searching, and Bulk and Skull's new boss.

The former Blue Turbo Ranger, Justin opted not to join his teammates in their journey to find Zordon, instead staying with his dad. However, when his friends were captured, he reunited with Storm Blaster and with a spare morpher, became the Blue Ranger once again.

The former Mighty Morphin Black Ranger, Zeo Ranger IV Green, and Green Turbo Ranger before entrusting the powers to Carlos. Adam returned to coach Carlos after the latter's confidence was shaken, only to use his damaged Power Morpher to become the Black Ranger once again.

The United Alliance of Evil 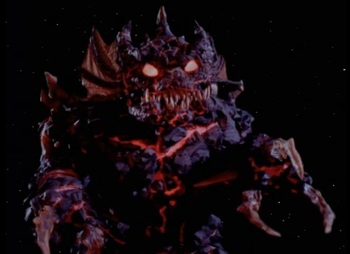 The Grand Monarch of Evil and the leader of the United Alliance of Evil. He was responsible for capturing Zordon. 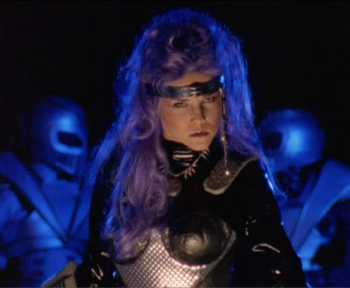 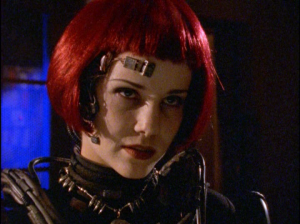 The Princess of Darkness, Astronema was Dark Specter's most loyal servant, and was sent to stop the Space Rangers from finding Zordon through any means necessary.

Her real identity is Karone, Andros' sister, who was kidnapped by Darkonda at a young age, and raised to be evil by Ecliptor 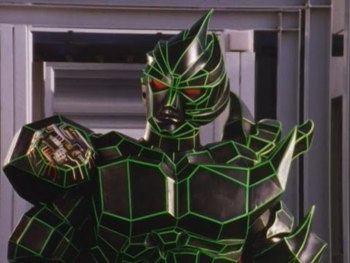 Astronema's second-in-command and the Princess' father figure. He is also one of the most lethal fighters in the known universe and the veteran of countless battles. 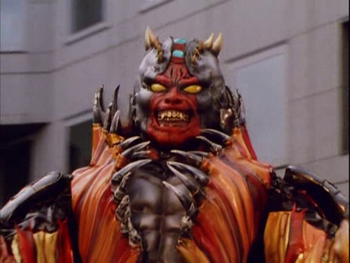 A ruthless and violent bounty hunter under the United Alliance of Evil's rule. He was also responsible for kidnapping Karone at a young age, turning her into Astronema. 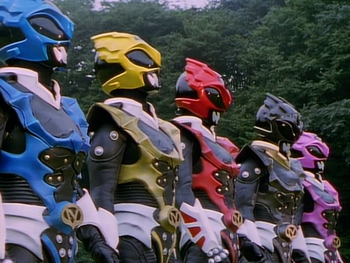 Five evil copies of the Power Rangers created by Astronema. Not only were they created to destroy their counterparts, but their main unknown goal was to drain Dark Specter's powers.

A stingray monster that the rangers used for the Simudeck.

Voiced by: Blake Torney
A monster sent down to drain Angel Grove's power.

Voiced by: Michael Sorich
An elephant monster that was sent to knock off buildings in attempt to knock over Professor Phenomenus's plutonium fuel that was in a lab.

An army of robotic foot soldiers that the Rangers use for the Simudeck. A lightning storm hit the Astro Megaship, turning the holographic enemies into physical beings. There was also a Craterite Leader, and they could combine into a Craterite Conglomerie

Voiced by: Ezra Weisz
A toad monster summoned by Destructipede.

Voiced by: Richard Cansino
A moth monster summoned by Destructipede.

Voiced by: Jackie Marchand
A termite monster sent to wake up her children on Earth.

Voiced by: Dave Mallow
A termite monster, and the son of Mamamite.

Voiced by: Kim Strauss
A scorpion themed monster that can turn their victims into Barillian Bugs themselves.

Voiced by: Brad Orchard (both)
A set of bison monsters. The first one was sent to copy the Ranger's weapons and abilities, with the second one being implemented with countermeasures.

Voiced by: Tadahiro Nakamura
A coral monster Darkonda sent against the KO-35 rebels.

Voiced by: Bob Papenbrook
A spike-plant like monster Astronema sent to prove her loyalty to Dark Specter.

Voiced by: Lex Lang (Jakarak)
Voiced by: R. Martin Klein (Seymour)
A pair of angler fish monsters. Seymour was originally Jakarak's servant, but stowed away on the Astro Megaship, causing Jakarak to go after him.

Voiced by: Richard Epcar
A robotic monster that was used to abduct people for Astronema's Secret City.

Voiced by: Derek Stephen Prince
A shape-shifting mechanical monster. On the ground, he's a black humvee, but when shot by the Satellasers, he took on a robotic form.