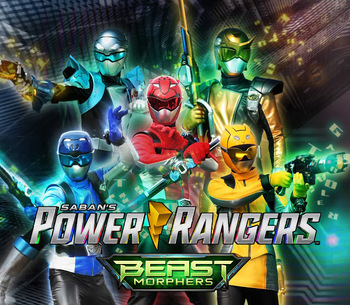 The 26th and 27th seasons of the long running Power Rangers franchise, adapting footage from Tokumei Sentai Go-Busters, succeeding Power Rangers Ninja Steel and Super Ninja Steel in 2019. Announced by Saban Brands and Hasbro at the 2018 Toy Fair on February 17th, 2018, Beast Morphers is the first series produced under the latter company, after Hasbro later announced they were buying the entire franchise from Saban in May 2018.

For over 25 years, the Power Rangers have been powered by a mythical source of energy known as the Morphing Grid. Now, the city of Coral Harbor is ready to use it for civilian purposes as an infinite source of clean energy. But the city's mayor has his doubts, as he's worried that yet another overlord wannabe is going to crawl out of the woodwork to claim the power for himself. While the power plant had planned for this by preparing Power Rangers of their own, the mayor is quickly proven right: a sentient computer virus named Evox infects the system and knocks out two of the Rangers-to-be, making digital copies of them to serve as his Co-Dragons. It's up to a squad mostly made of untested rookies to stand in Evox's way and make sure he can't take control of the source of all Rangers' power.

Beast Morpher was the final Power Rangers entry to use the services of music composers Noam Kaniel and Youseff "Joe" Guezoum, and producer Sally Campbell.

After gathering what he needed, Evox tells Nate and the rest of the rangers what his true origins are, along with his real identity.

After gathering what he needed, Evox tells Nate and the rest of the rangers what his true origins are, along with his real identity.