open/close all folders
The Rangers 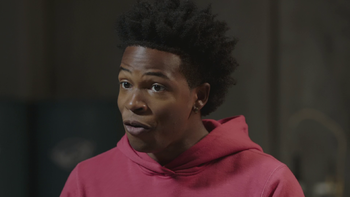 The son of Mayor Daniels, Devon's main passions are karate and video games, much to his father's disapproval. He snuck into Grid Battleforce to look at their Battle Simulator, but when Evox infects the morphing system, he becomes the Red Ranger in place of Blaze, the original candidate. 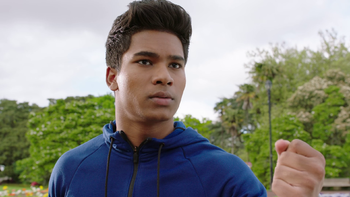 Ravi was one of the three original candidates to become Power Rangers by the Grid Battleforce. When Evox infected the system, he was the only one that was spared by the virus infection and became the Blue Ranger. 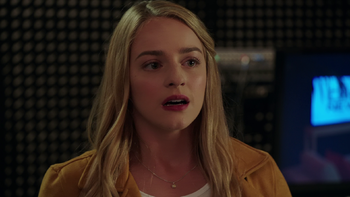 Zoey was originally part of the training program to become a Power Ranger at Grid Battleforce but was cut and reassigned to laundry duty. However, when Evox infects the morphing system, she becomes the Yellow Ranger in place of Roxy, the original candidate. 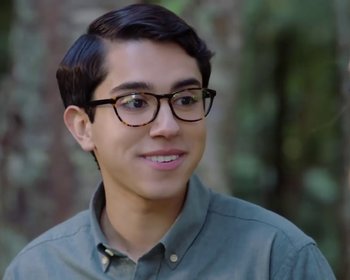 A genius scientist at Grid Battleforce, and the one that developed the Beast Morpher powers and arsenal. At one point, he was captured by Evox's forces and forced to help them with Scrozzle's cybergate, but he was able to sabotage the gate at the last moment and used it to become the Gold Ranger after combining his DNA with mantis DNA. 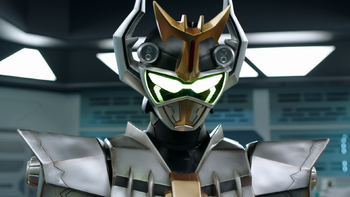 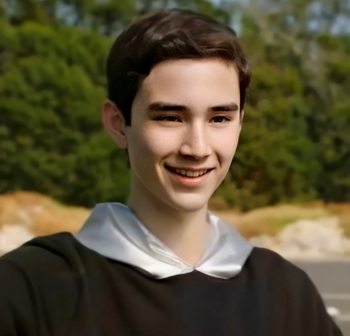 to see him as a human.

Portrayed By: Sam Jellie (As Human)

Originally a robot body that Scrozzle forced Nate to create as a vessel for Evox to possess once he is out of the cyber dimension. Nate managed to sabotage the plan and, through an accident, infused Steel with both scarab beetle DNA and his own human DNA, bringing him to life and turning him into both Nate's Beast Bot and the Silver Ranger. 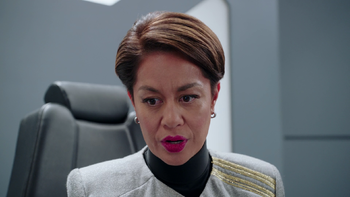 The commander of Grid Battleforce, and mother to Ravi.

The mayor of Coral Harbor and the father to Devon.

Head of Grid Battleforce and Ben and Betty's father. 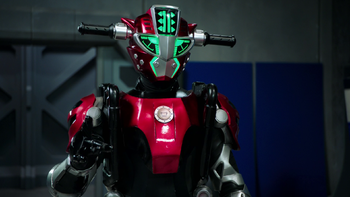 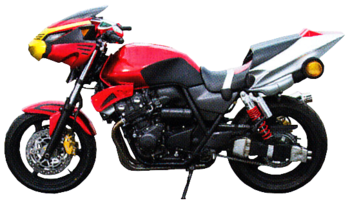 Devon's Beast Bot, a cheetah that becomes the interface of the Beast Racer Zord. He can also change into Devon's motorcycle. 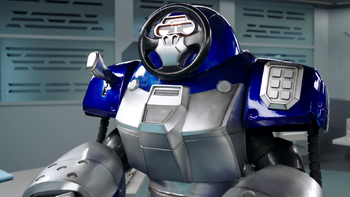 Ravi's Beast Bot, a gorilla who becomes the interface of the Beast Wheeler Zord. 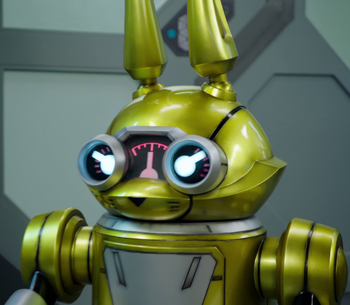 Zoey's Beast Bot, a jackrabbit who becomes the interface of the Beast Chopper Zord.

A reporter for Channel 10 and Zoey's mother. 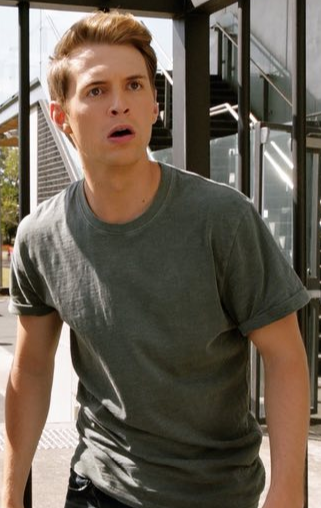 The original candidate for the Red Ranger powers, only to be forcibly corrupted by Evox, who created an evil Avatar of him. He awoke from his coma following the destruction of his Avatar. 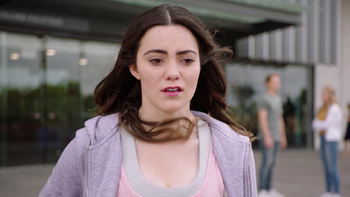 The original candidate for the Yellow Ranger powers, only to be forcibly corrupted by Evox, who created an evil Avatar of her. She awoke from her coma following the destruction of her Avatar.

A former Grid Battleforce Zord Maintenance worker that tried to blackmail her way into becoming Nate's lab assistant and then to discredit him so she could replace him completely, only to get fired after having her actions revealed. She later returns in Season 2 as the creator of the Beast-X King Zord.

A member of the G5 Galaxy Police Force. He came down to Earth to destroy Ryjack.
Advertisement:
Returning Characters

A genius scientist who both created the Ranger Operator Series tech and unintentionally let Venjix loose in her dimension. She was called in by Beast Morpher Rangers twice to help out.

A team of previous Dino-themed Power Rangers, brought together by Jason Lee Scott and Devon when Evox was making the Chimera Zord.

The mentor to the Dino Charge Rangers. He went to the main dimension to make sure Ryjack's relics never got into evil hands, only to be roped into the conflict thanks to Zoey. 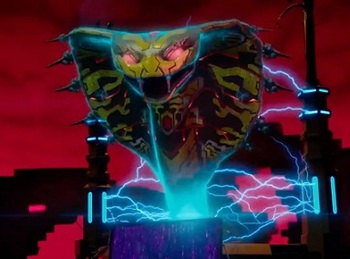 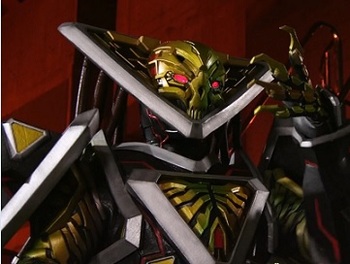 An evil sentient computer virus that wants to take over the Morphin Grid. He's actually Venjix, reborn after a young Nate mixed Morph-X and serpent DNA into the infected Cell Shift Morpher.

See here for his tropes as Venjix. 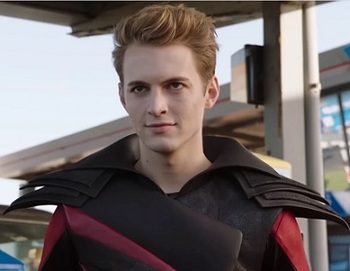 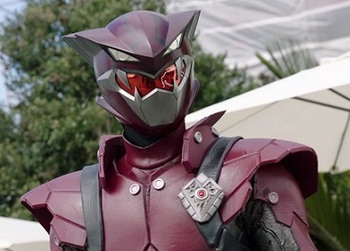 to see him morphed.

An evil Avatar of the original Red Ranger candidate. He was created by Evox and serves as one of his Generals in Season One. 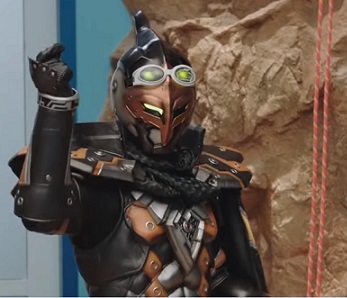 A robot created by Evox serving as Avatar Blaze's replacement. 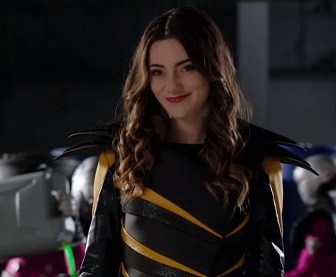 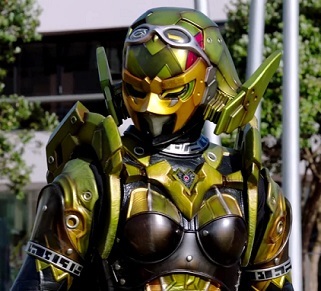 to see her morphed.

An evil Avatar of the original Yellow Ranger candidate. She was created by Evox and serves as one of his Generals in Season One. 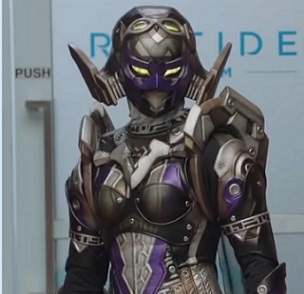 A robot created by Evox serving as Avatar Roxy's replacement. 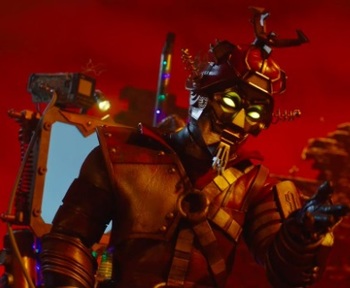 A villain hiding out in the Cyber Dimension to avoid a being known as Vargoyle. He agrees to help Evox return to the main world after Nate sent the former and his Avatars there in return for Morph-X. 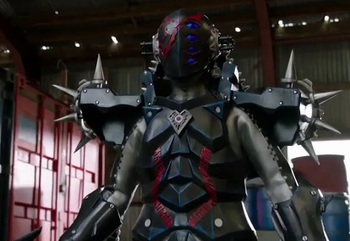 An early creation of Scrozzle, who rebelled against his creator after absorbing the Fury Cells' energies. After the tracks Scrozzle down to the Cyber Dimension, Evox recruits him, promising to reward him with the Beast power data Roxy has been collecting.

An intergalactic alien criminal that acts as an ally to Evox's Army.

A reincarnation of the original Goldar brought back to life by Evox.

Purple robotic warriors used by Evox. They were created by Scrozzle to protect himself from Vargoyle.
Robotrons

A tire-themed Robotron, and the first of his kind that fought against the Beast Morpher Rangers. He was created after Scrozzle infected a tire with the Evox Virus.

A syringe and medical equipment-themed Robotron Blaze created from a bicycle pump. He was sent to steal Morph-X from the X-Bikes.

A shovel-themed Robotron Roxy created from an excavator as part of her plan to manipulate Ravi.

A circular saw-themed Robotron Blaze created from a table saw.

A spray can/acid-themed Robotron Scrozzle created from an acid tank. He joined Scrozzle and Roxy in retrieving the deactivated Slicerdrone.

A cargo train-themed Robotron Blaze and Roxy created from a locomotive. He was sent to sabotage the Beast Bots by stealing their memories.

A vacuum cleaner-themed Robotron created to help out with the cybergate plan.

An antenna-themed Robotron Roxy and Blaze created from an antenna. He was made to tap into Grid Battleforce's communications to find Steel.

Voiced by: Daniel Watterson
A drill-themed Robotron Roxy created from a dark blue drill. He was installed with a power chip to scan the Ranger's abilities.

A wrench-themed Robotron Roxy created from a wrench. He was installed with a power chip to scan the Ranger's abilities.

A copy machine-themed Robotron Blaze created from a photocopier.

A tuba-themed Robotron Roxy created from a tuba. He was installed with a power chip to scan the Ranger's abilities.

A second tuba-themed Robotron Blaze created, and empowered with a Fury Cell.

A candle-themed Robotron Roxy created from a candle. He was installed with a power chip to scan the Ranger's abilities, and given the final Fury Cell to corrupt Devon.

A light bulb/cotton candy machine-themed Robotron. Vargoyle sent him as a distraction while he planted the Memory Pulsator.

A cage-themed Robotron Scrozzle created from a small metal cage.

A key-themed Robotron Robo-Roxy created from a padlock. He was sent to sabotage Grid Battleforce.

An hourglass-themed Robotron that was tasked with absorbing technology.

A puppet-themed Robotron Scrozzle created from a hand puppet. He was tasked with capturing Nate for Evox's plan.

A giant stadium-themed Robotron created by Robo-Blaze when he infects a giant arena dome. His main mission was to trap Devon and destroy him.

A tiara-themed Robotron Robo-Roxy created from a young girl's tiara.

A beetle-themed Robotron Scrozzle created from stag beetle DNA that was inside Nate's scanner.

A yellow cargo train-themed Robotron sent out to collect Morph-X.
Gigadrones
Giant Zords created by Scrozzle. To launch one into the real world, Scrozzle uploads a Robotron's data onto a blank. The models include Alpha, Beta, Gamma, and Delta.

An Alpha Gigadrone with the data of Cycletron, and the first-ever Gigadrone to be launched.

A Beta Gigadrone with the data of Needletron. It was sent out to steal Morph X from a Morph X Tower in Tango 6.

A Gamma Gigadrone with the data of Slicertron sent to drain Morph-X from a nearby tower.

A Beta Gigadrone with the data of Meltatron. It was sent to stop Devon from opening the hanger doors.

An Alpha Gigadrone with the data of Railtron. It held the first pair of Gigatronics inside itself.

A Gamma Gigadrone with the data of Vacuutron. It was sent to drain Morph-X from a nearby tower.

An Alpha Gigadrone with the data of Antennatron. It held a pair of Gigatronics inside itself.

A Gamma Gigadrone with the data of Tooltron. It held the first Delta Gigadrone inside itself.

An Alpha Gigadrone with the data of Burnertron. It held a pair of Gigatronics inside itself.

A Beta Gigadrone with the data of Shockatron. Vargoyle sent it out along with its ground counterpart as a distraction while he planted the Memory Pulsator.

An Alpha Gigadrone with the data of Infernotron. Scrozzle piloted this Gigadrone against the Beast Bots. It held a pair of Gigatronics inside itself.

Four Gigadrones with the data of Boxertron sent to attack Devon in the Racer Zord. Each one represented the four main Gigadrone models available.

A Gamma Gigadrone with a gold cannon.

A Gamma Gigadrone with magnet bars on its arms.

A giant Zord Evox and Scrozzle created from four Energems and the DNA of six dinosaurs.