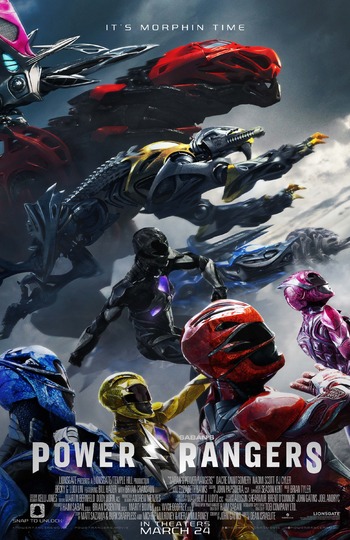 We can be heroes, everywhere we go, keeping us down is impossible, cause we're unstoppable.
"The Power Rangers were a legion of warriors, sworn to protect life. You must become those warriors."
— Zordon

Saban's Power Rangers is a 2017 cinematic reboot of the Power Rangers franchise, produced by Saban Brands and Lionsgate, written by John Gatins with story by Burk Sharpless and Matt Sazama (Dracula Untold and Gods of Egypt) and Kieran and Michele Mulroney, and directed by Dean Israelite.

The film is a contemporary re-imagining of the show that started it all, Mighty Morphin' Power Rangers. Five teenage outcasts with little in common come across a hidden cluster of alien artifacts and quickly discover that they've been gifted with extraordinary powers. Soon learning that they're destined to become the next generation of Power Rangers under the guidance of a mysterious alien mentor, the five must team up in order to stop a resurgent alien threat from destroying the world.

The film's cast includes Dacre Montgomery as Jason (the Red Ranger), Naomi Scott as Kimberly (the Pink Ranger), RJ Cyler as Billy (the Blue Ranger), Becky Gomez as Trini (the Yellow Ranger), and Ludi Lin as Zack (the Black Ranger). Elizabeth Banks has also been cast as Rita Repulsa and Bryan Cranston (who voiced two monsters in the original series and was the source of Billy's original last name) has been cast as Zordon, with Bill Hader as Alpha 5.

The film was released March 24, 2017. A tie-in graphic novel titled Power Rangers: Aftershock was released by Boom! Studios (who also publish the Power Rangers comics) and served as an immediate sequel to the movie.

After purchasing the Power Rangers franchise from Saban Brands, Hasbro announced their intentions of producing a "follow-up" movie on August 8, 2018. After much speculation about whether or not said follow-up would be a sequel, it was confirmed by Hasbro in December 2019 that the next Power Rangers film will be another reboot, effectively ending any chance for a proper sequel.