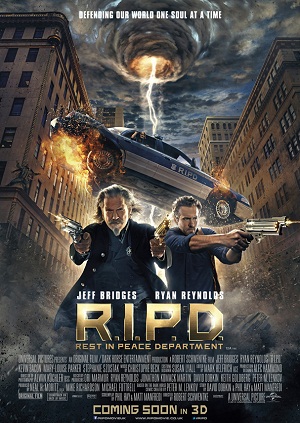 R.I.P.D is a 2013 supernatural comedy film based on the comic book Rest in Peace Department, created by Peter M. Lenkov and Lucas Marangon and published by Dark Horse Comics. It was directed by Robert Schwentke and written by Phil Hay and Matt Manfredi.

After detective Nick Walker (Ryan Reynolds) is killed in action, he is taken to join the undead police division and is assigned to be the partner of Roy Pulsipher (Jeff Bridges), a veteran officer of the R.I.P.D — the Rest In Peace Department, a department of dead police officers dedicated to protect and serve the living from arrogant, malevolent, bloodthirsty evil spirits who refuse to move into the afterlife.