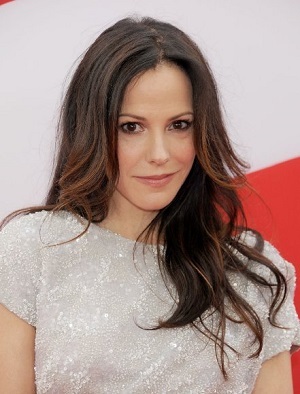 Mary-Louise Parker (born August 2, 1964 in Fort Jackson, South Carolina) is an award-winning American actress who has been appearing in movies, on television, and on the Broadway stage since the late 1980s. To date she has won a Tony, an Emmy, and two Golden Globes.

Her early career included an appearance on the TV soap opera Ryan's Hope amidst a few other small roles. She also played the lead role of Rita Boyle in the Broadway production of Prelude to a Kiss. Her performance earned her a Tony nomination for Best Actress in a Play in 1990. Her movie career began to take off in 1991 with significant roles in the films Grand Canyon and Fried Green Tomatoes. Some of her other noteworthy films from the 1990s include The Client, Bullets over Broadway, and Boys on the Side. In 2000, she returned to Broadway and portrayed the main character Catherine in the play Proof, for which she won a Tony.

In the 2000s, Parker began appearing more on television. From 2001 to 2006 she had a recurring role on The West Wing as Amy Gardner, for which she received an Emmy nomination. In 2003 she appeared in HBO's miniseries adaptation of the play Angels in America, for which she would win both an Emmy and her first Golden Globe. A second Golden Globe followed in 2006 for her work as the main character in the Showtime series Weeds.

While Parker has never married, she has had long term relationships with both Billy Crudup, with whom she has a son, and Jeffrey Dean Morgan. She also adopted a daughter from Ethiopia in 2007.