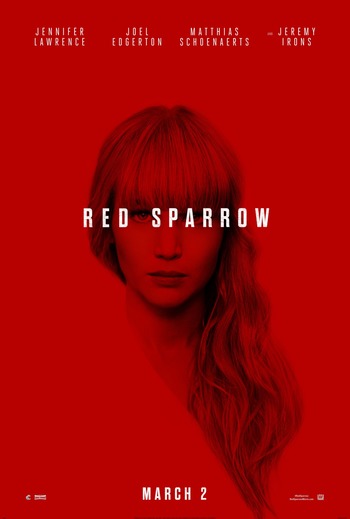 Seductive. Deceptive. Deadly.
"When we are finished with you, the person you were will no longer exist."
— Matron
Advertisement:

Red Sparrow is a 2018 spy thriller film directed by Francis Lawrence, starring Jennifer Lawrence and Joel Edgerton in the lead roles. The screenplay was written by Justin Haythe, based on the novel of same name by Jason Matthews.

Dominika Egorova (Lawrence) is a prima ballerina for the Bolshoi Ballet, but a broken leg during a performance ends her career. Desperate to care for her disabled mother, she turns to her paternal uncle Vanya Egurov (Matthias Schoenaerts), a high-ranking officer in the Foreign Intelligence Service (Sluzhba vneshney razvedki or SVR), who sends her to play Honey Trap to a Russian oligarch. He says she's only to swap out his cell phone with a bugged one, but then sends an assassin who garrotes the oligarch while he's raping her.

Afterwards, offered the choice of going to spy school or getting a bullet in the head as a witness, Egorova opts for the former and is trained by a cruel woman known only as Matron (Charlotte Rampling) as a "Sparrow", an operative taught to use every tool at her disposal, especially sex, to manipulate targets for intelligence work.

Meanwhile, CIA operative Nate Nash (Edgerton) is running a highly placed mole in the SVR. When a meet goes south due to Moscow police being a Spanner in the Works, he's reassigned to Budapest in hopes of finding a way to contact his mole and get him to work with another officer. The Russians now know they have a mole problem and figure the quickest way to find the spy is to get Nate to talk. So they send a sparrow to get close to him, Dominika Egorova.