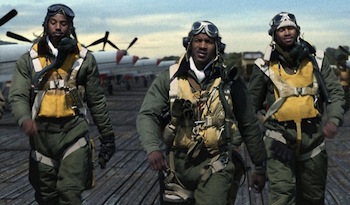 A 2012 historical action drama film directed by Anthony Hemingway and starring Cuba Gooding Jr. and Terrence Howard, based on the exploits of the Tuskeegee Airmen, an all-black squadron of American fighter pilots in World War II.

The first feature film to be produced by Lucasfilm after 2008's returns to the Indiana Jones and Star Wars franchises, as well as its first film with 20th Century Fox since Star Wars: Episode III — Revenge of the Sith. This was also the studio's last independently made film prior to being bought by The Walt Disney Company nine months later.