Adored by the Network 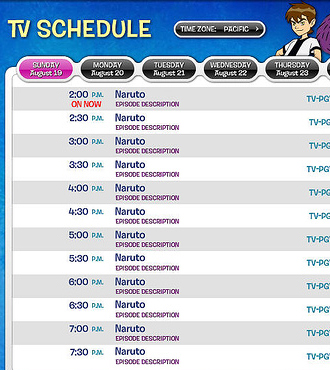 Cartoon Network, or Naruto Network?note Schedule from the August 2007 Naruto Hundo marathon
"If you're giving me eight straight hours of King of the Hill, aren't you forcing every single non-King of the Hill fan to abandon your channel for the rest of the day to go watch something else?"
— Cracked, 5 Ways Television Went Crazy Since I Quit Watching in 2003

So you're curling up on the armchair to watch your favorite show — but the schedule has been changed and yet another airing of the network's most popular (or just favored by execs) show is airing in its place. Your blood boils, but there's nothing you can do — it's the network's pet program.

This is Adored by the Network in a nutshell. An over-promoted, over-aired program that either dominates the entire schedule or gets promoted over every other show on the network or some combination of the two. Whenever networks stumble upon a massive hit show, this show usually gets the most attention and most promotion. Marathons are run, special programming events occur often surrounding the show, and the show is given multiple airings daily.

This usually comes at the expense of all the other shows on the channel, particularly the shows on the verge of being canceled. At the very least, they will just be ignored. At the very worst, they can be canceled or re-tooled to make it more in line with the adored show. And at very, very, worst — it could signal the first signs of Network Decay, as the network may add more shows similar to the network darling to the lineup.

Despite the network's fixation on this show, it doesn't fit the nature of being the Creator's Pet because, well, if it's a hit, then many people like it. It may be a critical darling that's loved by all. You yourself may like the show. But you also like other shows on the channel and the overbearing presence of the program just may be too much. This may lead to even the people who genuinely enjoy the show may getting sick of it. Enough of this can ironically result in the show being considered Screwed by the Network, as it can lead to the show's downfall and cancellation.

As of The New '10s, the trope has exploded across all networks, due to the changing landscape of television due to the meteoric rise of streaming services. Ratings for live viewing have fallen dramatically, particularly for networks aimed towards children and young people. Most of a network's day schedule usually consists of one or two shows that are dependable for ratings and ad revenue, with premieres airing erratically. Adored By The Network has now become the de facto standard for much of television.

Before you add an example, keep in mind this isn't Complaining About Shows You Don't Like. Also, the simple act of airing the show a lot of times doesn't alone qualify it for this trope. The network has to go above and beyond to prop this show up constantly.

See also Marathon Running (where whole marathons can be dedicated to a single show), Cash Cow Franchise, Hollywood Hype Machine (when this happens to actors), Creator's Pet (when this happens to characters and the fans are annoyed), Repeating Ad (when this happens to commercials), Wolverine Publicity, and Network Decay. Network to the Rescue is a sure sign of this. Contrast Screwed by the Network; also sometimes the result of this trope. See also Network Red-Headed Stepchild, Renewed Before Premiere.

Alternative Title(s): Adored By The Studio