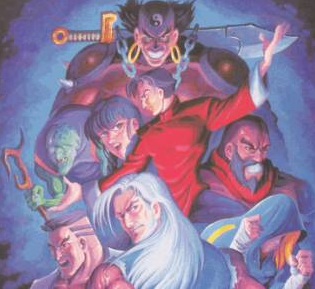 The DOS cover.
Street Fighter II (and its updates) was one of the hottest games of the early nineties, so some companies decided to Follow the Leader and make their own Fighting Games to compete against Capcom. And then there a few who went a little too far in trying to replicate that game. Super Fighter (in Chinese: 快打至尊) is a fighting game for IBM-PC systems running MS-DOS. It was developed by C&E, Inc. of Taiwan, and first released in Taiwan on February 20, 1993.
Advertisement:

The Excuse Plot of the game is as follows: "The game's plot centers on a drug broker and his murderous minions who claim ownership of the world's combined freedom. Showing their true menace by murdering top ranking government officials, they send a shockwave of fear across the United Nations. Eight heroes, trained to readiness, accept the challenge of going face to face with the top three of this evil circle. The outcome of this battle will truly decide where man's freedoms lie."

And amazingly enough despite being such a blatant knock-off, it was given a mobile game spin-off, called Super Fighter Block Battle, in 2008 and a re-release in 2013 for Microsoft Windows on the 15th and 20th anniversaries of the game's release respectively, by a group of developers calling themselves Super Fighter Team.

Notably this is one of the infamous games played and riffed

Not related to the similarly named 2011 video game Superfighters.