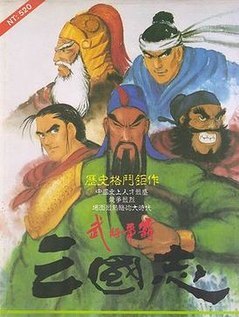 The Five Tigers of the Shu Kingdom. Clockwise from top-left: Huang Zhong, Ma Chao, Zhang Fei, Guan Yu, and Zhao Yun.
From the pages of history begins a century of war.
Advertisement:

Sango Fighter is a series of Fighting Games released by Taiwanese video game company Panda Entertainment based on Romance of the Three Kingdoms.

The first game, titled Sango Fighter, was released in 1993. The game's Story Mode followed the Shu Kingdom as it sends out its Five Tigers—Guan Yu, Zhang Fei, Zhao Yun, Huang Zhong and Ma Chao—against other warlords of the time as well as the Kingdom of Wei in a bid to restore the Han Dynasty. The game also included a Vs mode as well as local Player Versus Player.

A sequel to Sango Fighter, titled Sango Fighter 2, was released in 1995. While the game retains the same game modes as its predecessor, its Story Mode is overhauled into a campaign that follows one of the three kingdoms (or just Lü Bu) as they attempt to conquer all of China. In addition, the number of playable characters was expanded to include other famous characters from the Three Kingdoms period, such as Sun Ce.

Although the series was incredibly popular in Taiwan, a lawsuit brought against Panda Entertainment by C&E, creators of Super Fighter, effectively throttled the success of the series and, beyond an unofficial release of the first game in the United States, never achieved the same level of success as Street Fighter, which it draws heavy inspiration from.

Has no relation to a character of the same name from Inuyasha.