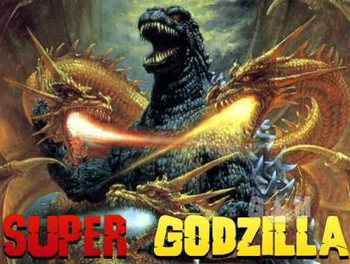 The year is 199X, and mysterious messages are suddenly received announcing a general attack on all of Japan. Then, just as in the message, first King Ghidorah appears in Osaka and starts to tear the city apart. Helpless before the monster, the Self Defense Agency turns its eyes to Godzilla, sleeping at the bottom of the Sea of Japan, as its final weapon. What they had in mind was to control Godzilla with human hands and make him fight the monster. The plan was executed immediately; the operation box that was developed by Professor Ogata was shot into Godzilla successfully. The Strategy succeeded and Godzilla awoke. But could Godzilla and his ferocious fighting spirit really be controlled? Everything depends on you who have the controller in your hands.
—The game's Attract Mode
Advertisement:

Super Godzilla, released on SNES in 1993 for Japan and 1994 for the rest of the world, is easily considered one of the most disappointing Godzilla games since you don't fight the other monsters so much as you step forward, punch, move back, select an attack and then just watch a short cinematic of the monsters beating each other up. In short it's less of a video game and more of a movie.

The game is most notable for having a rather good story with several plot twists, which makes sense considering it uses the script for the unmade and canceled Godzilla vs Bagan movie. The game is also well known for the ability to turn Godzilla into the title character, Super Godzilla in the last two stages and the unused monster Bagan, who makes his first and, so far, only appearance in this game.