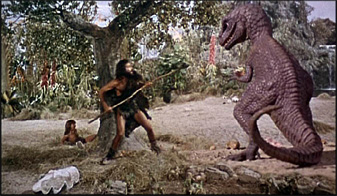 Would Allosaurus have any hope to become the new WWF icon?
This series tells the extraordinary story of life before the dinosaurs, a time when strange and savage creatures forth a ruthless battle to rule the Earth. [...] This is Life's forgotten story, an epic war for our world. A war between MONSTERS.
— Extracted from Walking With Monsters trailer

A specific variation of What Measure Is a Non-Cute?, in which a prehistoric/extinct animal which is portrayed as more powerful, dangerous and/or deadly (if not also dumber) than any still-living equivalent to the point where they cease being an animal and becomes a marauding monster — larger and faster than any extant apex predator, with no equal in the modern world! Filled to the brim with claws and jaws! Able to smash apart man-made vehicles to get at the tasty, tasty humans inside, a feat no lion or tiger or bear can do!

There is some Truth in Television — to fulfill their status as apex predator, a predator would have to be big — or at least badass enough to take down things bigger than itself, often armored or just as vicious. Most modern-day creatures are nowhere as large as, say, a Brachiosaurus, or as armored as a Triceratops — and without such niches, there's no reason for modern-day animals to be just as enormous or clawed.

See also Dinosaurs Are Dragons, Dumb Dinos, Reptiles Are Abhorrent, Everything Is Trying to Kill You, Our Monsters Are Different, and Historical Villain Upgrade. If you want to see some Real Life infos about extinct critters, see here. For a popular way of averting this, see Domesticated Dinosaurs and Non-Malicious Monster.