Literature / The Land That Time Forgot 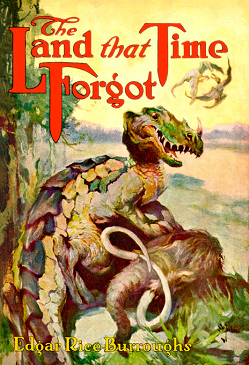 A fantasy novel by Edgar Rice Burroughs, The Land That Time Forgot is the first of his Caspak trilogy first published in Blue Book Magazine as a three-part serial in the issues for September, October and November of 1918. In June 1924, Chicago based publisher A. C. McClurg combined the complete trilogy for publication in book form, simply known as The Land That Time Forgot. The three segments are now usually issued as separate short novels beginning with the Ace Books editions of the 1960s. The sequels are titled The People That Time Forgot and Out of Time's Abyss.

Though The Land That Time Forgot starts out as a harrowing wartime sea adventure taking place during World War I, the story ultimately develops into a Lost World story reminiscent of such novels as Jules Verne's Journey to the Center of the Earth and Arthur Conan Doyle's The Lost World. Though Burroughs added his own twists by postulating an unique biological system for his lost world where slow evolution in the world outside is recapitulated as a matter of individual metamorphosis, presented as a mystery whose explication is gradually worked out over the course of the next two novels, forming a thematic element serving to unite three otherwise rather loosely linked stories.

The novel was adapted into a 1975 fantasy/adventure film produced by Britain's Amicus Productions, where it became a sleeper hit, inspiring Amicus to make a sequel, The People That Time Forgot, as well as an adaptation of another Burroughs novel, At the Earth's Core.

In 2009, American independent film studio The Asylum released a science-fiction film based on the aforementioned Burroughs novel and a remake of the 1975 film, promoted under the title Edgar Rice Burroughs' The Land That Time Forgot and released in other countries as Dinosaur Island. Despite the title, the film is a rip-off of Land of the Lost.

In 2016, comic book studio American Mythology Production produced the The Land That Time Forgot, which was touted as a sequel to the original books. This was followed by a never-completed tie-in series, See-ta the Savage, in 2018.

The Land That Time Forgot trilogy provides examples of:

Alternative Title(s): The People That Time Forgot, Out Of Times Abyss