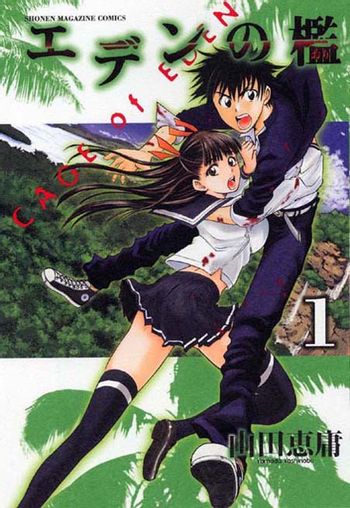 Cage of Eden (original title エデンの檻, Eden no Ori) is a Manga by Yoshinobu Yamada which can be summarized as "Lost, but as a manga." It was serialized in Weekly Shonen Magazine from 2008 to 2012 for 185 chapters, which were compiled into 21 volumes.

A class of Japanese high schoolers are on their way back from a trip to Guam when the plane hits a freak turbulence and crash-lands on an unknown island. The place turns out to have an ecosystem stuck some 50 million years in the past, with all manner of dangerous megafauna.

Class clown Akira, who had initially found himself isolated, manages to gather a small group of survivors—a flight attendant, his childhood friend, a reclusive geek, and a friendly delinquent. Together they try to survive in the hostile environment.

However, the most dangerous creatures on the island may turn out to be of the bipedal kind...

There is now a Character Sheet that could use some love.